Last week, I had the great honor of attending the inauguration of the twelfth president of Hope College, John Knapp. 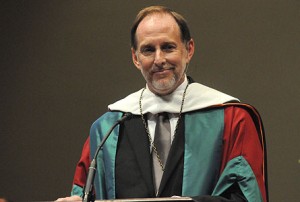 The service was held in Dimnent Chapel, and it was by far one of the coolest experiences I’ve had at Hope so far. All of the professors were there, along with representatives from colleges and universities around the United States and the world, with whom Hope has a relationship. Major donors of the school, the Board of Trustees, community members, and students were also in attendance.

In the middle of the inauguration, President Knapp gave his Inaugural Address. This is given by every new president, and is about the vision that the new president has for the future of Hope. In his speech, President Knapp talked about how he sees Hope emerging from it’s current role as a top regional college into a nationally recognized college. He highlighted that Hope already has the characteristics of top national colleges: bright students; top-notch professors, and nationally-ranked programs. I definitely think that in the years to come, we will see President Knapp’s vision take place.

The night before, I was privileged to attended a dinner for major donors of the school with some of the Hope College Student Ambassadors. It was so awesome to be around so many people who love Hope as much as I do! I was able to meet several of them and have some pretty neat conversations. If you ever get the chance to talk to alumni and/or donors of Hope, I would highly recommend that you take it!

The inauguration of a college president is pretty rare in the first place, but is even more rare to occur when you are attending the school. I’m so happy that I was able to see this historic event take place! If you want to take a look at some inauguration pictures, click here!