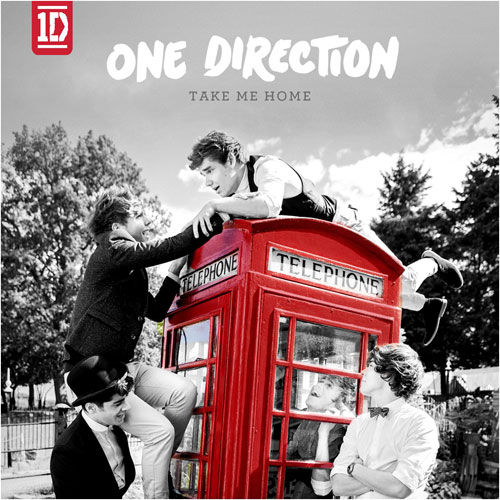 I don’t know if these guys even need an introduction. In the very slim chance that you have no idea who they are, here is a quick biography: One Direction was formed in 2010 on the UK’s version of the X Factor. After having come on the show individually, Harry, Niall, Zayn, Louis, and Liam formed a group at the suggestion of Nicole Scherzinger. The group become surprisingly popular on the show, and have since grown to become the biggest pop act in the world right now. This past Tuesday, their second album, Take Me Home was released. If you follow my twitter, then you know that I purchased a copy. I have been listening to it non-stop, and I think that I have heard the songs enough times to review them!

1. Live While We’re Young: You’ve probably heard this song on the radio, because it’s the lead single from the album and has been getting a lot of play time in the last few weeks. It has a sound very similar to that of the über popular “What Makes You Beautiful.” The simple, yet catchy lyrics and high energy vibe make this song infectious and one of the highlights on the album. 9/10

2. Kiss You: Another fun song with simple lyrics. The message in this song is the boys asking a girl to kiss her, which is totally unrealistic considering those guys could get just about any girl on the planet to kiss them. Other than that, it’s a good one. 8/10

3. Little Things: This song is one of the biggest surprises on the album. It’s a
soft acoustic ballad about all of the imperfections someone has that makes them
unique and beautiful. All of the boys get fairly equal singing time, which
doesn’t always happen and is great when it does happen because each of them has
a lovely voice. Co-written by lyrical genius Ed Sheeran, this is easily one of the
best songs on the album. 10/10

4. C’mon, C’mon: Even though this is the shortest song on the album, it has the
liveliness of any other up beat song. The story here is a boy gets ditched by
the date he came with, sees a girl, and wants to dance with her. It’s peppy, but
not my favorite. 8/10

5. Last First
Kiss: Love is the topic here as the boys sing that they
“want to be your last first kiss.” The tempo is a little on the slow
side, but it still has a lot of energy. This is also one of the few songs that
some of the boys (Liam, Louis, Zayn) helped to write! 8/10

6. Heart Attack: Love does not come without heartache, as is the topic of “Heart Attack”. In this song, a boy experiences the all too familiar emotions of seeing a former love interest with another boy. The song is great because it is so relatable, but my favorite part is the occasional “OWW!” yelled out in the chorus. Seriously, it’s adorable. 9/10

7. Rock Me: Sampling from the ever popular “We Will Rock You” by Queen, the main message is that a boy wants a girl to “rock him”. This is one example of how Take Me Home moves into more mature and sexually suggestive territory without being too outwardly explicit. The rock n’ roll sound helps give it a catchy yet edgier vibe. My only problem with “Rock Me” is that it references “summer ’09” like it was a big deal when in reality they were all around age 15 and probably didn’t do very much. 9/10

8. Change My Mind: A more mature sound is heard distinctly in this song as a boy tells how he is willing to not leave a girl and would change his mind if only the girl makes it known that she wants him. They do a good job of showing they are growing up, while also managing to play on their youthfulness. 9/10

9. I Would: I knew this song would be amazing before I ever heard it, because I knew it was written by three members of one of my favorite bands, McFly. This song is very similar to Taylor Swift’s “You Belong With Me” in that the character in both songs mention how he/she is up against better competition in trying to win his/her soul mate. This is another big highlight on the album because of the on-point harmonies and cleaver lyrics. 10/10

10. Over Again: Another acoustically driven song like “Little Things”. The multiple lines about healing broken pieces and starting all over again are touching and lets the audience hear a vulnerable part of them. 8/10

11. Back for You: This toe-tapping hit is based upon the band’s experience being away from home while they were touring in the United States and other parts of the world. All of the boys except Zayn helped to write this song, and two of the ones that did help, Louis and Liam, brought their personal stories to the song because they both had girlfriends while touring. I’ve found myself listening to this over and over again, and I think you will too. 10/10

12. They Don’t Know About Us: A piano driven soft medley turns into an up tempo beat while the boys sing about the troubles of being in a relationship of which people don’t approve. As Billboard.com‘s Chris Payne writes, “the modern-day Romeo and Juliet saga makes for one of the album’s best songs.” While not easily relatable, it is easily enjoyable. 8/10

13. Summer Love: Ahhh, every teenagers dream and heartbreak. “Summer Love” does a good job the painting a picture of a perfect summer romance and the hurt that comes when it ends. This is another one of the songs that starts off slow and builds momentum as it goes. 9/10

Overall: This album is a big step in the right direction after Up All Night. The boys grew up a lot in between the two albums and it shows completely. In order to enjoy Take Me Home, you have to take it for what it is, which is not much more than teen pop. Don’t expect to listen to one of the greatest albums of all time. If you are able to get past that, you will like this album.

Happy listening! Let me know what you think, either on here or on twitter!