On August 7th, I accompanied my freshman roommates (and now roommate and suitemate) to a Coldplay concert at the United Center in Chicago.

My suitemate is obsessed (to put it lightly) with Coldplay, and when she found out they would be in Chicago, we were the first to know! The concert was incredible, and we ended up being in the front row to enjoy the concert due to our fan persona.

Here’s a zoom-in of the panoramic above. 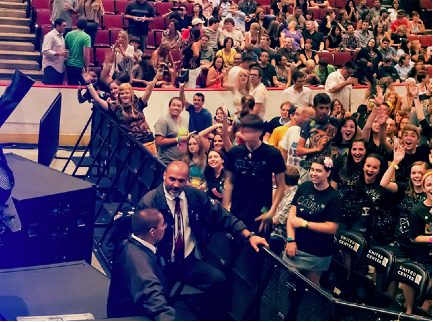 Morgan and her friend Rachel made us a great glowing sign that said “We’re Glowing In The Dark.” Morgan also made us beautiful t-shirts with ironed on letters. Together, Morgan and Rachel spelled Coldplay, and Shannon and I both had MX – Mylo Xyloto  on our shirts! We also added some glow paint so we would glow in the black lights.

The memory was so great, on Wednesday night Morgan invited us to go see a one-time premiere of the Coldplay Live 2012 Movie in Grand Rapids. The movie was the same concert we watched, but it was better the second time. It was awesome…