On Saturday 28-9-12, Sevilla FC hosted FC Barcelona in the sixth game of La Liga, the premier fútbol league in Spain. Considering Barca was undefeated at 5-0 coming into town, Sevilla was definitely considered the underdogs, despite having the home pitch advantage. However, previous to this matchup, Sevilla’s defense had only allowed 2 goals in their first 5 games, an impressive statistic. Regardless, I had my doubts as to whether they could shut down the reigning scoring leader, Lionel Messi, and his supporting cast of world-class players.

To my delight, obtaining tickets to the match was much easier than I expected: we simply took the Metra train to the stadium on Monday and purchased tickets directly from the box office. There was virtually no wait, and the game didn’t even sell out. In retrospect, I guess this was to be expected, considering the state of Spain’s economy.

Abiding by Spanish custom, our crew went out for tapas before the match.  Afterwards, we hoofed it to the stadium. The streets were extremely festive, as everyone was adorned in the red & white of Sevilla. It was eerily reminiscent of an American college campus before a D-I football game, complete with the sirens of a distant ambulance.

To my delight, despite purchasing upper level seats, we still had an incredible view of the pitch. We were on the sidelines, facing the benches. This beats being stuck behind a goal, where often, you only catch half the action (particularly if one team dominates ball possession). Cough, Barca. Furthermore, Estadio Ramón Sánchez Pizjuan has incredibly steep stairs–leading one to think twice before galloping down the stairs to make a pit stop.  Spanish fútbol fans must have had extra potty training, as there is only one stoppage of play at halftime (unlike baseball!). Truly great foresight by the architects in their attempt to make every seat in the house a good one! 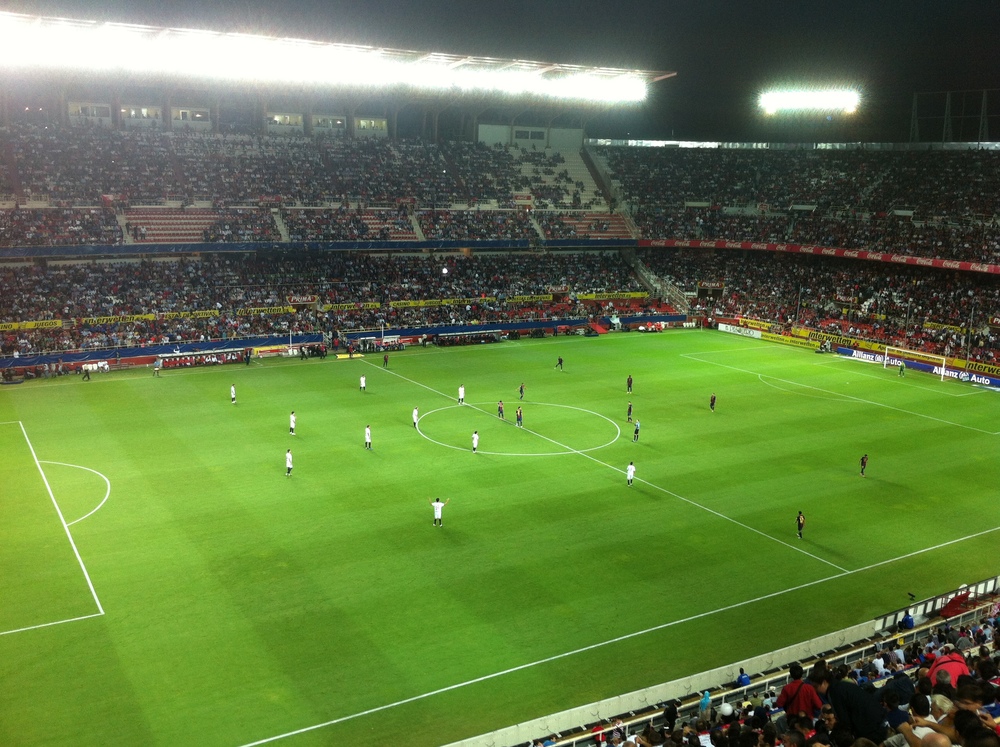 As expected, Barca dominated play to start the game, although they didn’t challenge Sevilla’s keeper. Sevilla just couldn’t seem to maintain possession to set up any kind of attack–until they got a fast break that resulted in a long deflection landing perfectly on Piotr Trochowski’s foot inside the box. He took two careful touches and directed the ball into the far lower corner. It’s an understatement when I say the stadium erupted. My fellow Polack had done it again! After scoring the decisive (and only) goal against Real Madrid just a week before, Piotr had already became my favorite player on Sevilla’s roster. My friends claimed it to be a sign that I am obligated to purchase his #15 jersey. We shall see.

Halftime came and went and only minutes later, Álvaro Negredo accepted a through ball and broke through two defenders to chip in another goal for Sevilla.  The stadium was LIT-TRALLY (insert British accent) in a frenzy. Up 2-0 against arguably the best club team in the world. Whew!

And then things went sour. Cesc Fábregas cashed in on a strike from the top of the box, bringing Barca back into the game. Gary Medel was ejected for an apparent headbutt, courtesy of a Hollywood-worthy dive from Fábregas. At this point, the tides had turned and Barca had all of the momentum, with 10 players to Sevilla’s 9.  Time ticked on, and it looked like Sevilla might hold on until the final whistle.  Until the 89th minute, when Señor Fábregas converted again, this time from a well-timed pass from Messi, who had been quiet all game. What the referee didn’t see was that as the play developed, Thiago (Barca) knocked the ball down with his arm. The play should have been whistled dead long before the ball was in the back of the net. The ref may have missed it, but Sevilla fans certainly did not, as they reacted in outrage, yelling expletives in Spanish.

But the game wasn’t over yet. There was still 5 minutes of injury time to be played.  Just halfway through (2:30), David Villa took a give-and-go pass in the box and pounded the ball past Ándres.  The Barcelona reserves rushed the field to celebrate.  The stadium was almost funeral silent, excluding the scattered Barca supporters.  Sevillanos simply stood dumbfounded, baffled by their club’s misfortune and spoiled effort.

To be completely honest, I wasn’t completely sure who I wanted to win. My favorite team is Barca, and Leo Messi is my fútbol hero. However, I live in Sevilla, so I felt like I owe my loyalty to my home team. Plus, I enjoy rooting for the dark horse.  After seeing the disappointment etched on Sevillanos’ faces, I think I would have enjoyed seeing Sevilla FC walk away with an upset (ideally, Messi would have scored a beautiful goal as well).

I am excited to attend more games in the future, and am headed to Barcelona this weekend to try and scavenge tickets for El Clásico, the famed matchup between the two Spanish powerhouse clubs: Real Madrid and Barcelona. If I do happen to get in, expect another fútbol themed post! 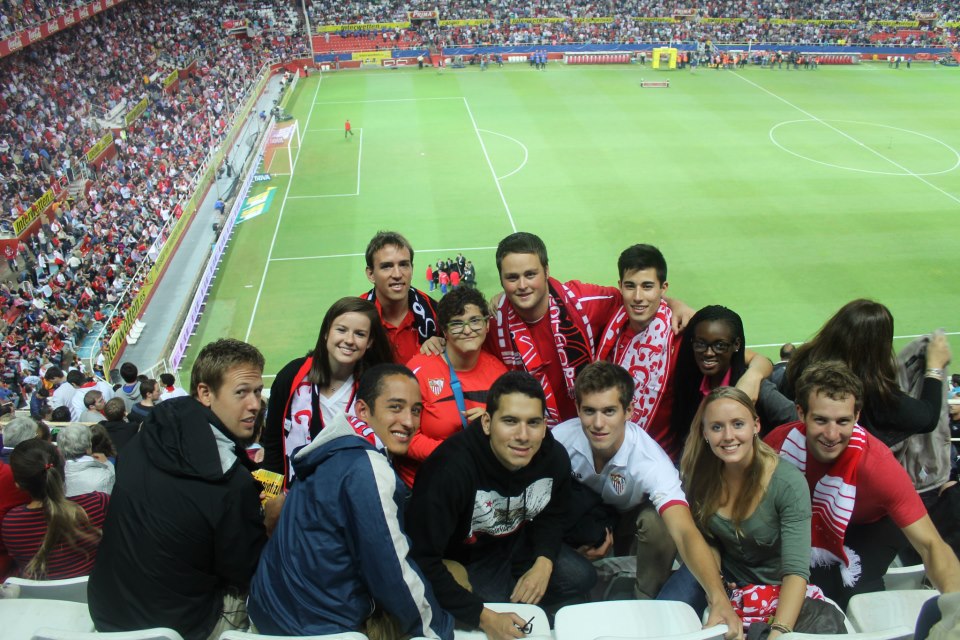 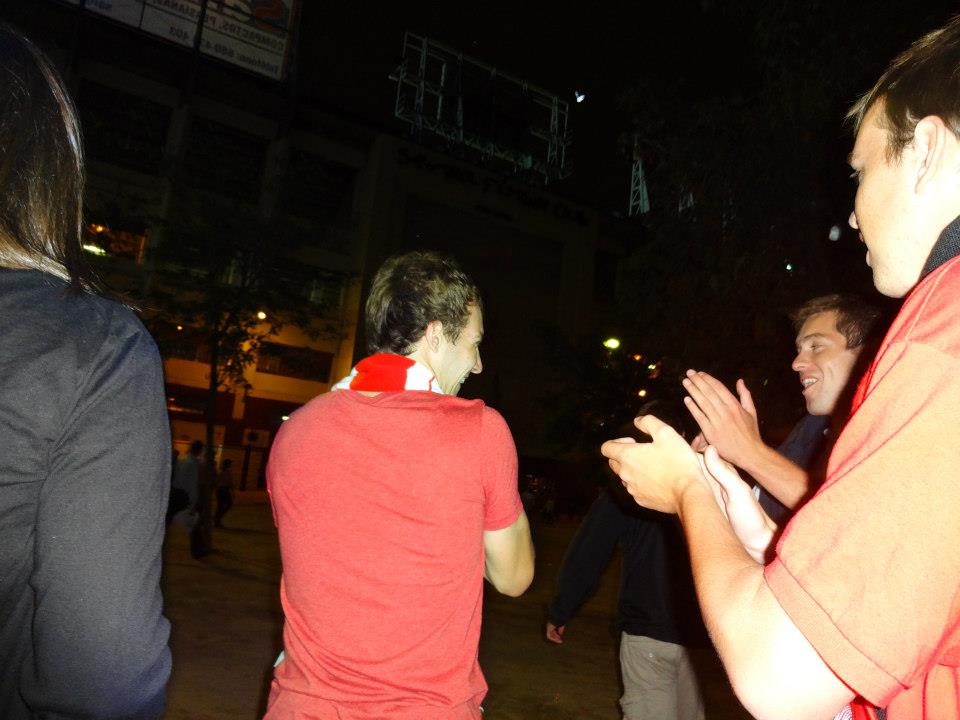 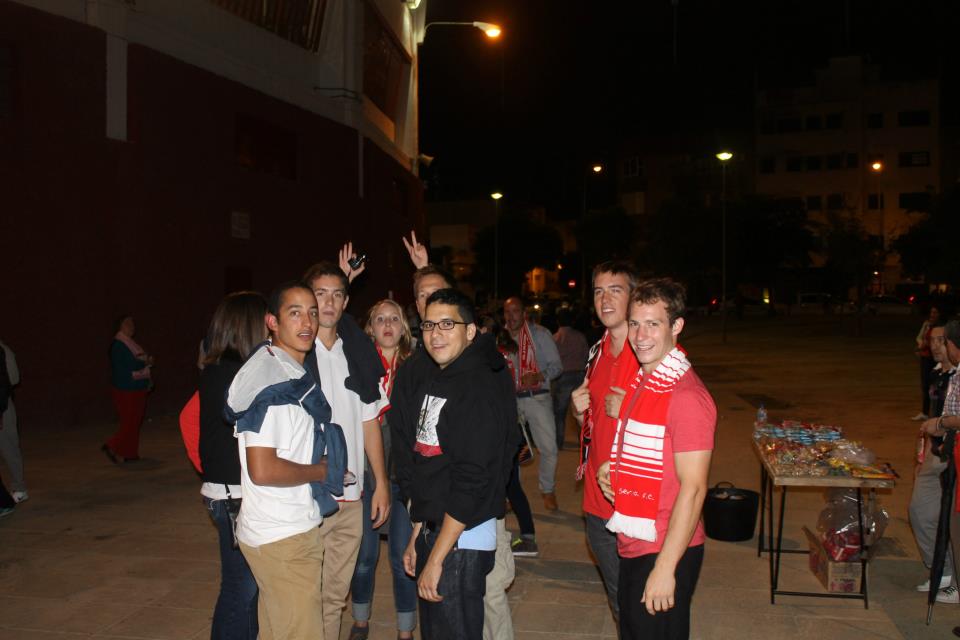 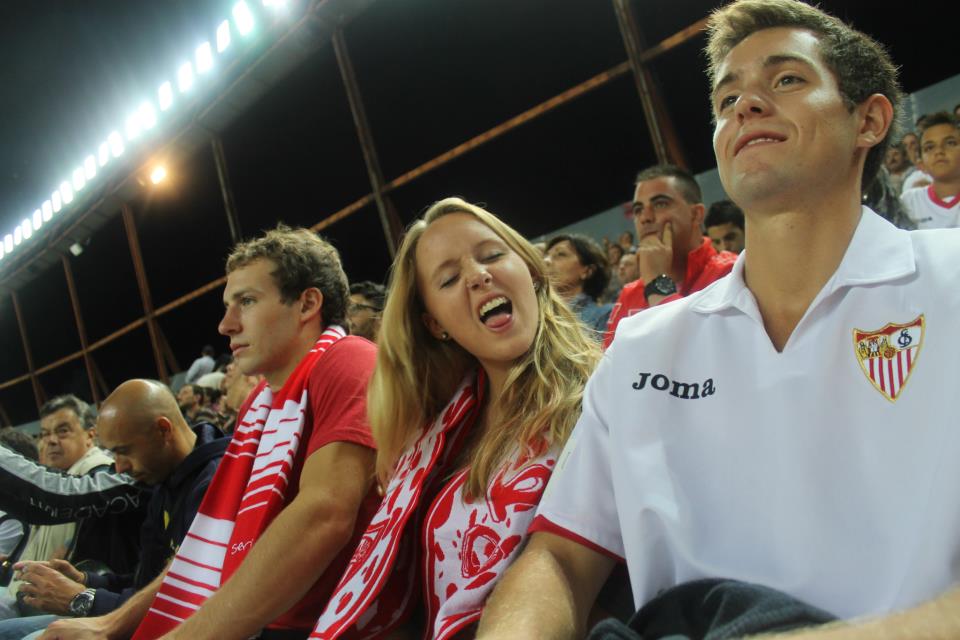 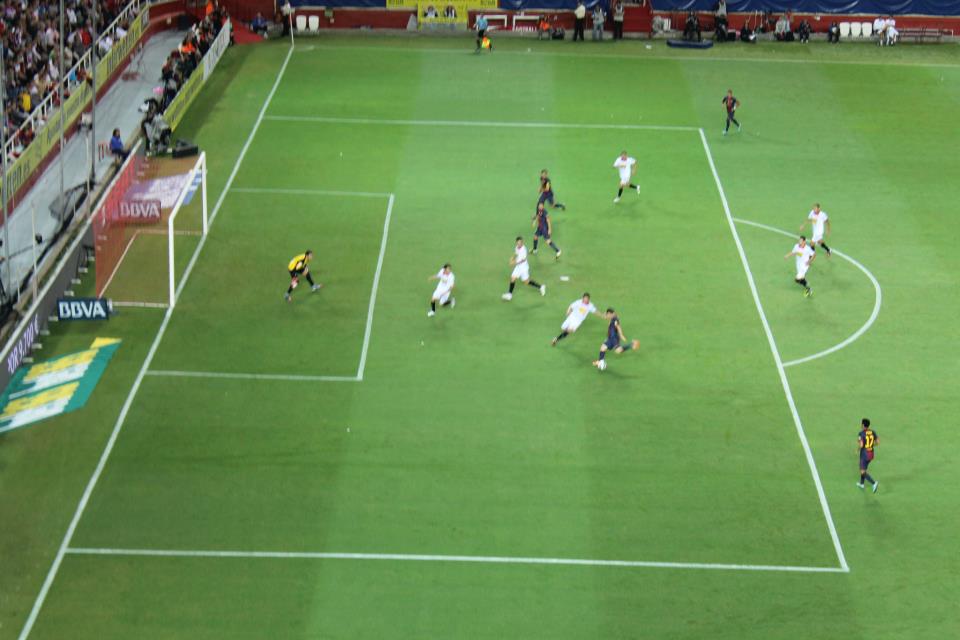 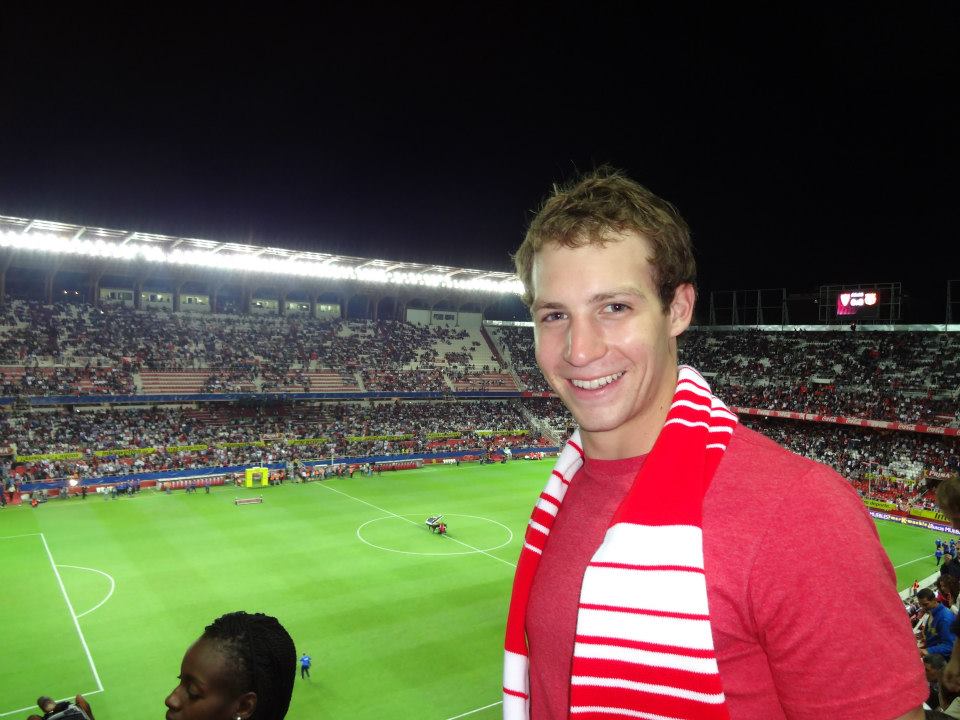