One of the reasons why I joined my sorority, Theta Gamma Pi, is because it states in our purpose: “[we] will be active in the community through leadership and service. While upholding respect for our own unique differences, we will work to educate our fellow students to ultimately promote the growth of diversity on campus.” This really stood out to me because I think it should be something we ALL should be doing in our own lives. Wherever you are, it is important that you get up and get active in your community. Here at Hope, getting involved could mean joining the many diverse organizations like the Latino Student Organization, Black Student Union, or Hope’s Asian Perspective Association! You don’t even HAVE to join if you don’t want to, just go to their events! Or, getting involved could mean educating others on an issue that effects a large group of people. 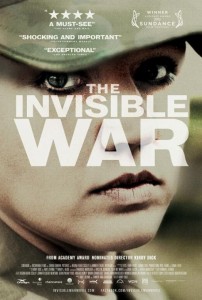 This year, we wanted to raise awareness of sexual assault by showing the documentary, The Invisible War, which exposed the epidemic of sexual assault in the U.S military among females and males. Throughout the documentary, female and male survivors of sexual assault told their stories and how their cases against their perpetrators were repeatedly covered up by their commanders. It shows the struggles these men and women face on a  daily basis as they try to rebuild their lives while also speaking out to fight for justice. Personally, I had little knowledge of this serious issue within the military. It was an eye opener for me to hear these women tell their stories of how their assault not only broke the bond that was formed between their “brothers,” but how it affected their family and friends around them. It made me angry to see how their perpetrators were not punished for their crimes because the evidence was not reviewed or simply covered up. This documentary raises serious questions about how the military handles these claims of sexual assault and what needs to change so that these survivors do not have to spend their entire lives fighting for justice.

Following the documentary, there was a group of panelists that included:

Panelists answered questions and offered their insight on how important it is that this issue of sexual assault is addressed not only in the military, but here at Hope as well. While the documentary is focused on sexual assault in the military, sexual assault happens right here on our very campus. Often times we as students turn a blind eye to the bad that goes on at Hope, but the fact of the matter is that it should be our responsibility to educate others about this issue.  STEP, or Students Teaching & Empowering Peers, is a group on campus that is committed to educating others on interpersonal violence as well as empowering students to be active bystanders, thus positively effecting social change on campus. I first heard about STEP my freshman year when they held a presentation about how we as students can act as active bystanders if we see someone who is unable to give consent or is in an alarming situation. If you would like to know more information about STEP and what they do, here is the link to their Facebook: https://www.facebook.com/hopecollegestep.

For more information about The Invisible War and how YOU can take action against the epidemic of sexual assault in the military, go to: http://www.notinvisible.org

Thanks so much for reading!