November has been a good month for me so far. I’m finally finally FINALLY starting to feel better after being sick since fall break. I’m just feeling very renewed and really not stressed at all, which is pretty miraculous for me (as you know if you read my last blog post!). Throughout November I have been trying to make some positive changes in my life and I’ve just been so much happier and felt a lot more content in a lot of ways. I thought I would share some of the things I’ve been doing. I hope you’re having as great of a November as I am, and if you aren’t, then maybe you can try one of these things and it will help a little bit!

As you may be aware, I really like to buy things, but I hate to spend money. I feel so guilty almost every time I buy something because I know there’s something else I should be saving that money for (like, I don’t know, college). Towards the end of October I decided to stop using my debit card for a few weeks. It was really hard at times, but I’m glad I did it. Now I’m even more motivated not to use it. I like seeing the balance in my bank account go up instead of down for once! It’s a good feeling. 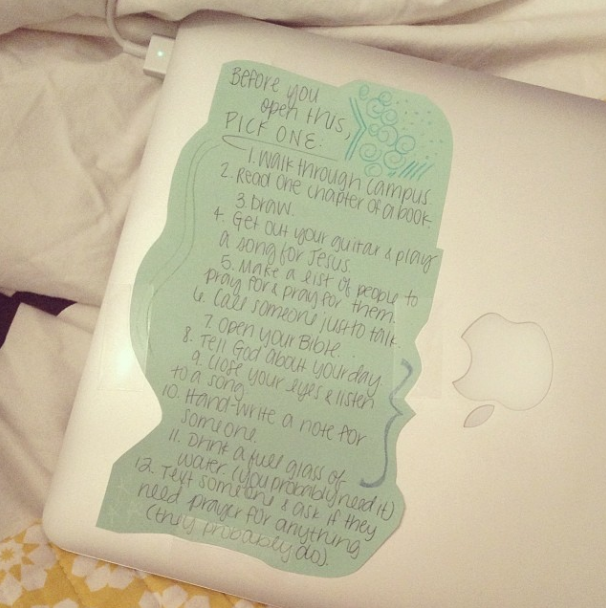 Having my own laptop at school is awesome, but it can also be a little bit of a struggle. It’s so easy to be so constantly plugged in, but I’m trying something new to keep myself a little more balanced. I saw something on Pinterest that inspired this, but I took it a lot further. I taped a list of things to do before using my laptop right onto the cover so that I’ll always see it. I’ve done something on the list every time I’ve used my laptop so far since I made the list, so hopefully I can keep that up!

This isn’t really a priority for reasons that it should be, but it is a change I’ve made that I think is probably helping me feel better. I am a huge fan of all things coffee, along with Coke and Dr. Pepper. The fact that there’s Dr. Pepper in the pop machine in Phelps is such a struggle for me. It’s so hard to make it to the cucumber water when I have to walk past that every time… Oy. But anyway, the medicine I’m (still!) on from being sick can tend to make people not sleep, and I have learned the hard way that a little caffeine has huge effects on that. One cup of coffee early in the day and I’ll be up several hours later than I need to be at night. I will admit that I’ve cheated on this a few times, but I’m trying!

Is it possible to be a to-do list addict? I really think I am one. Luckily, I think that’s a pretty healthy addiction. I try to make a pretty long list every day. It keeps me productive and motivated to get things done. I HATE leaving boxes unchecked! I put pretty easy things on there to make myself feel good too, like “go to class,” “take a shower,” stuff like that. You have to start somewhere! 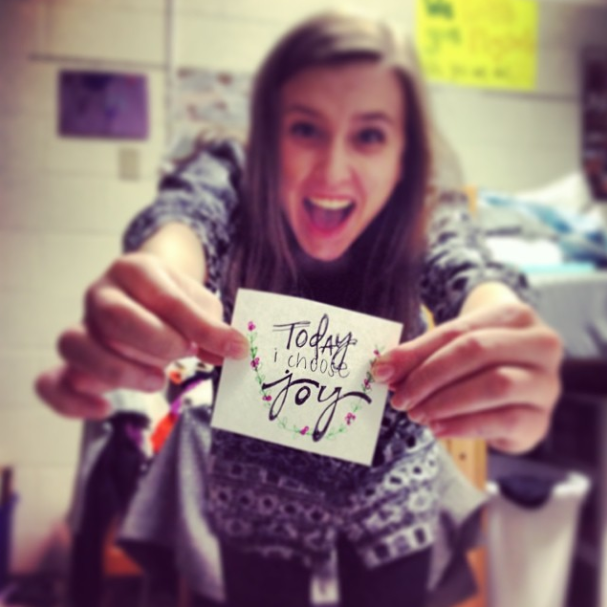 Since school started, I’ve been really focusing on God making me new. A big part of that for me has been choosing to live in joy despite what else may be going on at the time. I think it’s so easy to get sucked into just paying attention to the things we wish were going better, but God has really been working on showing me just how blessed I am. Some days I have to really make a conscious effort to choose to live my life in joy, but it’s been so much more rewarding and I’ve felt so much better. I really can’t complain about any little things that may be going on in my life when God is doing so many good things that I don’t even know about yet! 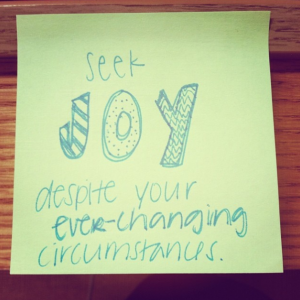 Have you been making any changes for the better lately? Send me an email at kathryn.krieger@hope.edu, leave me a comment, or tweet @hopekathryn17! Thanks for reading!

The Lord will guide you continually,
giving you water when you are dry
and restoring your strength.
You will be like a well-watered garden,
like an ever-flowing spring.