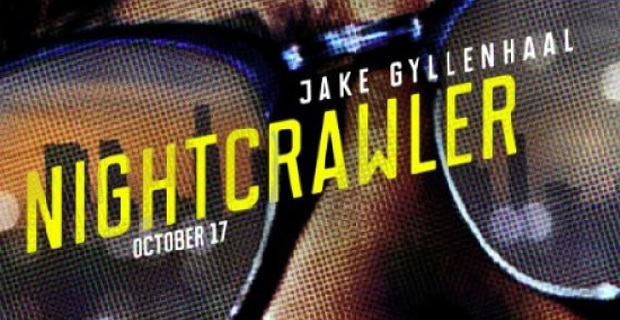 It’s cold, dark, and snowy and I just watched what could be one of the best movies of the year. On sale on Google’s Play store for about 5 bucks, my girlfriend and I ordered some Hungry Howie’s and decided to escape the Michigan life and delve into the the neo-noir underbelly of Nightcrawler’s Los Angeles.

For those who have no idea what I am talking about, check out the trailer here.

I didn’t really know what to expect from this movie. From the trailer, it was something about a guy with a camera filming tragedy on the Los Angeles pavement. So Rachel and I turned down the lights and mashed our faces in pizza unaware of the mental roller-coaster we were about to experience.

The film revolves around the persistent character of Lou Bloom portrayed by Jake Gyllenhaal as he desperately finds work. Captured by the energetic allure of crime journalism, Lou muscles his way into the gritty work of capturing late-night tragedy on camera with the encouragement of morning news director Nina Romina. His newfound career expands as he hires a protégé, Rick Carey, to help him capture crime and feed the news machine with tragedy, violence, and loss. The rest you must watch for yourself.

There’s more at stake than journalism with Nightcrawler. The film itself was an intense rollercoaster ride of action and suspense, but it ultimately had us, the audience, look both into ourselves and around us.

There may be spoilers so I do not recommend reading my reflection about the movie below until after watching it yourself.

I highly recommend everyone to watch Nightcrawler and if you can, enroll in a cinema class at Hope!

I am a senior at Hope College with a major is Psychology. I was born in California, but I grew up in Korea and the Netherlands most of my life. I love to travel and experience the beauty our world has to offer us. View more posts