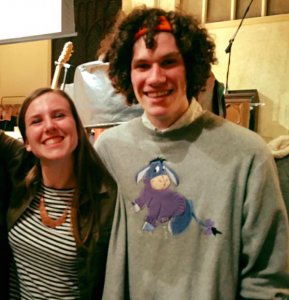 Jake is a pretty involved guy here at Hope College. He is a Nykerk Play Morale Coach, he is a staple member of the Dew Crew (perennially in the front row), he plays bass on the Worship Team, and he is the founder of the #fashionboys movement on Snapchat. I sat down with him to find out some of his perspectives and words of wisdom on the real Hope College issues and ways of life.

“They’re not who they think they are. That’s about it.”

“Nykerk is where dreams come true, hearts are mended, and friends are made. It’s friendly competition. It’s fun, it’s cool, it’s cooler than the Pull*, and it’s not just for girls.”

*BUT the Pull and Nykerk are both really awesome in their own ways!

On life in a res hall:

“Living in a res hall can easily be the best two years of your life. Treat it like so. ‘Nothing good happens after midnight’ is a lie. And love your neighbor.”

“Worship Team isn’t as cool as people think it is. What I mean by that is the people on it are not as cool as they think we are. Worship is hard sometimes, and the way we worship isn’t the ‘best way’ or the ‘grandest way’ or the ‘most effective way’ or ‘God’s favorite way.'”

“Don’t pay to join the Dew Crew at the beginning of the year*. Just walk to the front. Also, just because you’re in a student section, it doesn’t mean that you have to become a mean person.”

*Paying to join the Dew Crew gets you three cool Hope t-shirts, but I can attest to what Jake says – I never paid to “join the Dew Crew,” but I’ve stood in the front row at games, but I also really don’t go to games all that often… It’s all about what you want from the experience!

“Make sure that when the winter comes you don’t just go from class back to your cottage, or else you’re gonna go insane. You should probably do your dishes. Eventually. Whoever’s room is the closest to a common room should be a person who tends to stay up late, or else you’re going to run into a lot of problems.”

“It’s so good. If you say that you can’t find anything good there, then you’re bad at eating.”

“Be comfortable, but that doesn’t mean physical comfort. That means, find comfort in the way that you dress. Bootcut jeans are only ok if you’re wearing boots, and if you’re wearing boots, they’d better be steel-toed. The real poser is the one who condemns anyone else. I’m the real poser. Take pride in looking cool and make sure you’re actually cool too. Pretty soon, you’ll figure out you’re not cool, and that’s the place you want to be.”

“Snapchat makes sense. I’d say, take advantage of Snapchat as a way to get used to looking dumb without seeing people’s reaction when they look at you.”

“As hipster and ‘in’ as it might be, the coffee is actually really good. It’s also not actually a residence hall, even though you see college kids there all the time.

“Don’t get too attached to Hope. What I mean is, eventually, you need to begin to think of yourself in the future, when you won’t be a Hope student anymore, or else you’re going to have a rough go at it (like myself). Don’t waste your money on laundry. Call your mother: she’s the only mother that you have. If you’re a guy, stay away from girls. If you’re a girl, stay away from guys. If you have questions about that, come talk to me. I’d be more than happy to share my views. And don’t date my sister.*”

*His sister is a freshman at Hope. Big brothers, you know?

So, there you have it. Words of wisdom from Jake. If you have questions for Jake, make sure to leave a comment on this post, or contact me and I’ll be sure to pass it on to him! Feel free to get ahold of me via Twitter (@hopekathryn17) or by sending me an email at kathryn.krieger@hope.edu. Thanks for reading!

Your righteousness, O God, reaches to the highest heavens. You have done such wonderful things. Who can compare with you, O God?