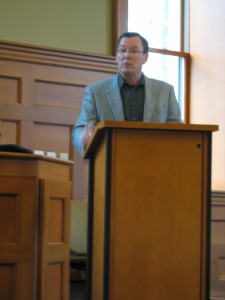 Van Wylen’s month-long hosting of the traveling Manifold Greatness exhibit opened on March 2 with a lecture from Dr. Marc Baer of the history department and a reception afterwards.

In his lecture, Dr. Baer explained the many political and religious factors that created an environment conducive for the translating and publication of the King James Bible. The Reformation and resulting movements of Protestantism led to a drive for bibles written in languages that all people could read. Several English bibles came into existence as a result, including William Tyndale’s translation and the Geneva Bible. Marginal notes in the Geneva Bible in particular contained sentiments that could easily be taken as anti-monarch, a point of concern for those ruling England during a time when religious tensions ran high. As a result, King James I of England held the Hampton Court Conference which led to the proposal for a new English bible, which in turn eventually led to the translation of the King James Bible. 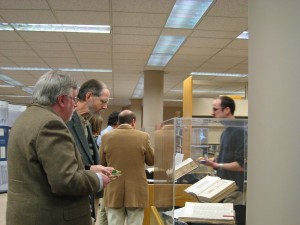 Several other Manifold Greatness events are scheduled for this week, including a workshop tonight at the Herrick District Library and two lectures. Complete details can be found on Van Wylen’s