In 1927, distance travel by automobile was less common than today. The U.S. had only recently introduced the numbered highway system, using existing roads, and the interstate freeways were still some three decades in the future. Even so, a trip home to Long Island from college in Holland mightn’t normally have merited a story — complete with a three-deck headline and a two-column photograph — in the local newspaper. 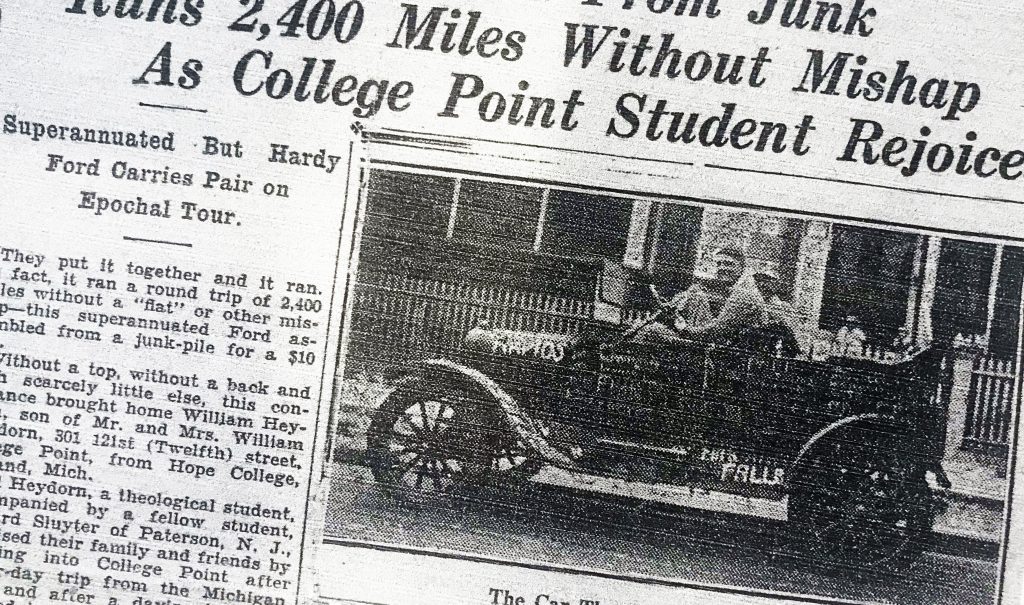 It happens, though, that Hope classmates William A. (Bill) Heydorn ’28 of College Point, New York, and Howard R. Sluyter ’28 of Paterson, New Jersey, made a particularly unique odyssey. They conducted what the newspaper characterized as an “epochal tour” in a “superannuated Ford assembled from a junk pile for a $10 bill” — about $147 in today’s dollars. The photo shows Heydorn at the wheel of the aged Model T, which the story noted was reliable but decidedly basic transportation: the four-door convertible lacked a top.

“They surprised family and friends by rumbling into College Point after a four-day trip from the Michigan town, and after a day’s visit they returned in as good time without a mishap of any sort,” the article notes. “Chalked with the names of the cities and towns through which it had passed, the Ford attracted considerable attention parked in front of the Heydorn home.”

The account continues, “En route from the college town on the shores of Lake Michigan the expedition paused in Detroit where in front of the big Ford factories a respectful salute of two honks was sounded. The boys drove through the southern Ontario peninsula and visited Niagara Falls and Buffalo along the way.”

As Heydorn’s son Dr. William H. (Bill) Heydorn ’55 of Tiburon, California, explained, his father attended Hope for three semesters, transferring in his junior year to meet the requirements for seminary. The elder Heydorn and Sluyter had known each other for several years before coming to Hope — Sluyter’s father had pastored First Reformed Church in College Point from 1915 to 1920, immediately prior to moving on to Paterson. They made the journey during the summer between their junior and senior years, which they’d spent working in a gravel pit between Holland and Grand Rapids.

After Hope, William A. Heydorn ’28 attended New Brunswick Seminary and became a pastor, serving churches in Schenectady, Kinderhook and Hawthorne, New York. He died at age 50 on Oct. 15, 1958. Howard R. Sluyter ’28 became a prominent businessman in Grand Rapids and Dallas, and served on the college’s Board of Trustees from 1968 until his death at age 79 on July 12, 1986.

In addition to being immortalized in print, the tale of the 1927 road trip made an important impression on Bill Heydorn ’55 (who is a physician who served in the U.S. Army for nearly 30 years and has stayed active in medicine since retiring as a colonel in 1989), including not least of all by influencing his college choice.

“The article and his scrapbook provided the incentive for me to stop in Holland on a trip around the country in between my junior and senior years of high school. The pickup truck used for the trip was adorned with the names of the places we traveled through,” he recalled. “I had a list of individuals of ‘friends of my dad’ who we could call upon, including his English teacher Irwin Lubbers, who was now college president. Dr. Lubbers personally gave of his time to tour the campus and convinced me this is where I wanted to go.”