Joe DiMaggio once said that Opening Day for Major League Baseball is “like a birthday party when you’re a kid.” For generations, the day has symbolized a fresh start and a sure sign of spring. This year, for one Hope College alumna, opening day will start early. Really early. 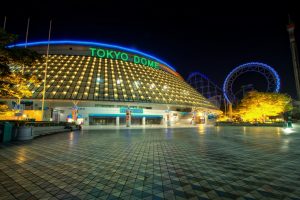 On March 20 at 2:35 AM Pacific Daylight Time, eight days and several hours before the rest of the league, Frances Schrock ’89 Traisman will be cheering on the Seattle Mariners as they play an international opener in the Tokyo Dome against the Oakland Athletics.

The Mariners have been connected to Japan since Nintendo purchased a majority of the team in 1992. They have had Japanese players on the roster every year since 1996. That is the same year that Frances Traisman was hired. Now as Senior Vice President of Sales, the former Hope College English major oversees business development and revenue generation through ticket sales, corporate partnerships, sponsorships, radio broadcast sales, customer engagement and analytics.

After graduation in 1989, Frances spent a year in China teaching English to college students in Hangzhou. A fellow teacher she met there encouraged her to move to Washington, D.C. She eventually landed a ticket sales job at the US Senior Open golf tournament at Congressional Country Club. She loved it. After the tournament, she and her husband, Cliff, packed up a moving truck and their yellow Labrador, Tuco, and headed for Washington (state this time). There, they started a family and their new careers.

Now in her 23rd year with the Seattle Mariners, Frances shares that she enjoys the benefits of her liberal arts education every day. “In our ever-changing world, having broad knowledge of a variety of subjects has made it easier to navigate the changes,” says Traisman who was part of Sigma Sigma and the Vienna Summer School during her Hope days. “Whether evaluating capital improvement projects, researching business development opportunities, or making sales presentations, I draw on a variety of skills and experiences gained at Hope.”

The connections she made while at Hope have also been instrumental in determining where she is today. Her travels to China were at the suggestion of a fellow Hope graduate, and she was introduced to her husband by one of her best friends from Hope. While she has been geographically separated from Hope for a long time, the Hope community continues to play a strong and supportive role in her life.

“Smart people with a curious nature and a broad familiarity of how the world is connected are key – and those are the type of graduates Hope produces.”

As she thinks about today’s students, she says “there are tremendous opportunities in sports and entertainment, especially in the world of data analytics. While it’s important to have someone to write code and structure data, it is as important, if not more so, to have people who can bring the data to life and use it to recommend improvements. Smart people with a curious nature and a broad familiarity of how the world is connected are key – and those are the type of graduates Hope produces.”

Frances’s advice to students interested in a career like hers is to do your research and talk to as many people as you can. Many opportunities exist in sports management, you just need to find the one that fits you.