Allyson Harper graduated with a double major in Women’s and Gender Studies and Psychology.  Allyson discusses one of her most formative experiences: organizing the 2014 Gender Issues Conference on Hope’s campus. 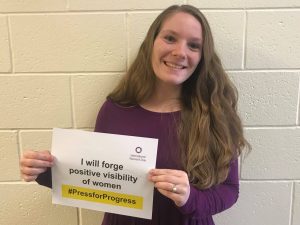 I am currently the Lead Shelter Advocate at the Center for Women in Transition in Holland, MI, and I have been with the agency since October 2016. While at Hope College, I interned with CWIT in 2013. After my time at the internship, I knew I wanted to work with survivors of domestic violence. I was employed in with some other social work organizations which provided me with the experience necessary to be well-equipped for my current position with CWIT.

So, you majored in WGS. How did your degree shape you?

I double majored in WGS and Psychology, but honestly, it was not until my senior year of the WGS program that I realized my passion for women’s and gender concerns. I had the opportunity to attend the National Women Studies Association (NWSA) conference in 2013. NWSA was an eye-opener. It made me realize I could make a career out of this work—the interdisciplinarity of Women’s and Gender Studies—and NWSA encouraged me to look into furthering my education with the possibility of a Master’s degree in WGS. Though I have not yet pursued a Masters in Women’s and Gender Studies, I am thankful NWSA; it shaped my approaches to my life and career.

Use this opportunity to gain as much experience as you can. It will make all the difference. Reach out, go to the events, and just participate. You won’t regret it.

I would love to teach a course on domestic violence, sexual assault, and sex trafficking.  I don’t have specific people I would include, but it is important to me to include the voices and perspectives of survivors.

My most recent favorite is the Hulu documentary Minding the Gapon Hulu. It from the point of view of an adult who witnessed domestic violence and was abused in his home growing up. My other favorite is Killing Us Softly IV.

Are you a WGS alum who would like to be featured on our blog? Email us! wgs AT hope DOT edu