Anna J. Clutterbuck-Cook graduated with a double major in Women’s Studies* and History. Anna is a reference librarian in Boston, and she discusses the various ways she has “sought … to put [her] feminist, social justice ethics into practice.” 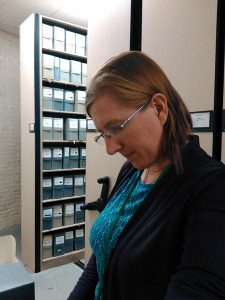 I currently work as a reference librarian at the Massachusetts Historical Society (MHS) in Boston, Massachusetts. Following my graduation from Hope College (1997-2005) with a degree in Women’s Studies and History, I worked in book retail for two years while applying for graduate studies in library science and history. I did not want to pursue a Ph.D., but I wanted to continue in a field that combined my love of research with my feminist commitment to anti-oppression politics. Working in a library felt like a good way to combine my scholarly and work histories in a viable career path. I moved to Boston in 2007 to begin a graduate program in History and Library and Information Science.

I grew up in Holland and attended Hope College because my father worked there; apart from brief residencies in Oregon, Indiana, and Aberdeen, Scotland, I had not lived outside of West Michigan before moving to Boston. I was ready for a change of scene! At the time, I imagined that I would spend four years earning my M.A/M.L.S and then relocate where the job market or family ties took me. Instead, both my job and family ties — I met my wife, an archivist, in graduate school, and her family is in New England — have anchored me in the Boston area for the past decade.

In addition to my work as a reference librarian, I have sought out other ways to put my feminist, social justice ethics into practice. In the library field, I stay current in histories of sexuality and gender, religion, race, and politics by reviewing for Library Journal, Publishers Weekly, and other publications. Two recent projects have been an annotated bibliography of LGBTQ titles for Library Journal (forthcoming, April 2019) and an in-progress review essay on three reproductive justice titles for the BMJ Medical Humanities journal. I have served as a facilitator for online courses on equity, diversity, and inclusion in libraries and served a three-year term as Inclusion and Diversity Coordinator for the New England Archivists regional professional association. I also volunteer at the queer community-based archives The History Project: Documenting LGBTQ Boston (founded in 1980).

Beyond my work life, I read romance (particularly queer romance), write fanfiction (particularly queer fanfiction), quilt and embroider, go on long walks, and spend time with my wife Hanna and our two cats. In January 2018 I founded Persistent Stitches, an all-volunteer crafting collaborative that raises money for resistance, social justice, and anti-oppression work through crafting. In March 2018, I formally joined the Unitarian Universalist Association through Arlington St. Church, a historic congregation in central Boston with a long history of support for LGBTQ folks and ongoing commitment to social justice action.

How did you come to WGS as an academic discipline?

Shortly after I began taking classes at Hope College, the 1998 Critical Issues Symposium (CIS) topic was Feminism & Faith. Though I already identified as a feminist (and was nascently aware of my bisexuality), the Feminism & Faith CIS offered me a glimpse of feminist theory and theology that left me hungry for more. I enrolled in a course on Christian Feminism the following semester, then moved on from there to women’s history, and eventually histories of gender and sexuality.

During my time at Hope College, I would describe myself as an “over-invested ally”: someone who understands themselves to be straight but feels drawn to queer community, and eventually discerns that they actually aren’t allied to it but a community member themselves. I struggled with internalized biphobia, wondering if I was queer enough to identify as such. As a part-time, commuting student, who was initially younger than — and finally older than — many of my classmates, I never really made social connections with peers at Hope but did find an intellectual and political home in what was then the Women’s Studies department. One very formative experience was a multi-year student-faculty research project that involved collecting oral histories from queer women who had belonged to a lesbian feminist group in West Michigan during the 1970s and early 1980s. This project both taught me research skills that I used for my Master’s thesis (on the Oregon Extension) and also brought me into contact with older lesbian and bisexual women who had meaningful lives and same-sex relationships. It was an early experience in seeing queer possibilities for my own future.

How did your WGS education shape you?

As part of the department’s twentieth-anniversary celebrations in 2012, I participated in a panel where I spoke about how women’s studies has mattered in my life. At that time, I reflected:

My feminism, at Hope College, wove back and forth across the boundaries of personal and academic life. On the one hand, feminist analysis was a way for me to understand the political upheaval around religion and sexuality I experienced here at Hope (in the late 90s). I was politically queer long before I was sexually active, in a same-sex relationship, or had to grapple with how to label myself in a world that demands sexual identification. By the time I entered into my first relationship — with a lover who happened to be a woman — I had a rich history of engagement with feminist and queer literature, political activism, and support networks to draw upon. That history made the transition from thinking of myself as “mostly straight” to thinking of myself as someone who was in a lesbian relationship remarkably easy. And I owe the Women’s Studies program at Hope for at least some of that.

In an academic and professional sense, the exploration of gender and sexuality in historical context is at the heart of what I do as an historian. The Women’s Studies program here at Hope was my entry into thinking about women’s human rights as they are connected to broader socio-political struggles against racism, homophobia, economic inequality. Academic feminism is often criticized for being abstract, privileged, and out of touch with the urgent political engagement needed in “real” peoples lives. And I think that’s a critique worth listening to (if you haven’t already, check out the anthology Feminism For Real edited by Jessica Yee). But in my life, college classrooms became one of the places where I wrestled with notions of privilege and with the complicated histories of oppression. And in part because of that, my scholarship will never be entirely divorced from my political or personal selves.

The slow realization that, as I wrote to a Hope College faculty member, “the most valuable gifts that my Hope College education gave me are the things the college likes to keep at arm’s length” has come with both grief and responsibility. With some personal distance from the RCA-centric arguments around queer sexuality, I decided in 2010 to formally withhold financial and other forms of support from the institution until they changed their institutional policies to be welcoming of queer people. I was recently both heartened and heartbroken to see that current students continue to protest a campus climate that allows racism and homophobia to flourish. The Hope College community is far from unique in facing these challenges, and I am grateful that so many of you continue to struggle from within to make positive change.

The intellectual framework of critical, intersectional feminism is essential for us to cultivate in this historical moment of deep inequity and the urgent need for all people to engage in meaningful anti-oppression work. We must build a more just and sustainable future for humanity and all living beings with whom we are deeply interconnected. WGS classes can be a fruitful space in which to build the intellectual and emotional muscles necessary to identify and challenge oppression wherever you live and work, from wherever you are situated along the axes of privilege and oppression. They will also challenge you to identify and analyze your social privilege (in whatever forms it takes) and leverage it in power-with rather than power-over ways.

Histories of social justice activism teach us that the struggle for liberation began long before we were born and will be carried on by those who come after. This can be an overwhelming realization. Humanity has acute, urgent needs that you alone cannot possibly address. “No one person can fight all of this,” historian Angus Johnston wrote after the 2016 election:

but no one person needs to. Wherever you put your effort in the coming days and years, your effort is needed. Whatever work you do to fight this crisis is important work. What’s vital is not what precisely you do, but that you do something—that you pitch in and lend a hand.

In the words of journalist Rebecca Traister, writing after the 2018 midterms: “This will be our lives, this fight.” The intellectual, emotional, and practical skills you gain through WGS courses will help you develop the strength and experience you need to find your place in this long tradition of social justice work.

I would love to teach a course titled Queer Histories, Queer Lives: Sex, Sexuality, and Gender in the Long Twentieth Century, that would be an intellectual and cultural history centering the experiences of people whose genders, sexualities, and sexual activities were considered nonnormative. Heather R. White’s book Reforming Sodom: Protestants and the Rise of Gay Rights (UNC Press, 2015) is a fascinating examination of the way mainline Protestants in the first half of the twentieth century understood the nature of same-sex desire, and how that understanding shaped their engagement around issues of human sexuality, the homophile movement, and gay liberation.

I don’t have a single favorite text, but Our Bodies, Ourselves by the Boston Women’s Health Book Collective (first published in 1973) was a formative reading experience for me as a young teenager. I devoured my mother’s copy of the first edition, and it was from OBOSthat I learned that being lesbian was possible, learned that I was entitled to sexual pleasure, and learned to think about my body, my sexuality, and my gender in explicitly political terms. I was also deeply honored and moved to participate in the revisions toward a 40th-anniversary edition, published in 2011. As a living resource for nearly fifty years, OBOS has had a long, rich presence in global movements for women’s rights.

Anna J. Clutterbuck-Cook (‘05) may be found on the web at thefeministlibrarian.com, on Twitter @feministlib, and by email at feministlibrarian@gmail.com. If you find yourself in Boston, she treats students to coffee, offers behind-the-scenes tours of the MHS, and welcomes fellow travelers to her pew on Sunday mornings. Reach out!

Are you a WGS alum who would like to be featured on our blog? Email us! wgs AThope DOT edu