Claiming Our Education: The Vagina Monologues

What is The Vagina Monologues?

From February 14-16 2019, the Women’s Empowerment Organization and S.T.E.P hosted Hope College’s production of The Vagina Monologues. It took place in the Fried-Hemenway Auditorium of the Martha Miller Center at 7:30 pm each night. The event started out with the two co-directors of the production, Rachel Dion and Nina Kay,  informing the audience about the origin of The Vagina Monologues: Eve Ensler interviewed over 200 women of various ages, races, and sexualities and asked them all the same questions about their vaginas. The result? The Vagina Monologues.

The whole production lasted a little over an hour, and after each show, there was a discussion session with panelists.

“One reason I chose to go to this event was that the high school I went to (Mercy High San Francisco, all-girls) also put on the Vagina Monologues as an assemble every year around Valentine’s day. It was a day that many of us looked forward to because we all left feeling empowered and good about our bodies and giddy after spelling out vagina together as a whole school (imagine a theater full of about 400 girls screaming “VAGINA” simultaneously–IT WAS GREAT). Though I did not expect Hope’s version to be the exact same, I did enjoy it back home and I wanted to see what the event would be like here.”

“While watching these performances, I was immediately taken back to middle and high school where I was uncomfortable with talking about my body, periods, and anything that had to do with sex. Hearing these ladies say “vagina” over again the way that they did [during the production] would have made me extremely uncomfortable [back then]; I am not sure if it was because of my age and my lack of sexual maturity and/or knowledge about the female body, but I hated talking about it; not so much of hearing about it.”

“I learned many different things from this event. One of the first things I learned about this event is what it actually is. I have heard about The Vagina Monologues when I first started going to Hope College and went to the activities fair. One of the women at the booth for WEO said that we should sign up for the vagina monologues and my first thought was what is that. I did not know what to fully expect until I went and listened to what the hosts said. Another thing I learned from this event is that every woman’s experience is different. I already knew this, but it was reinforced when I was watching the play.”

Connecting the Dots: From the Text to the Stage—and Back 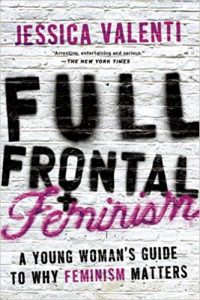 One of the monologues was about a woman and how her skirt does not ask for it. This idea connects to chapter four of Jessica Valenti’s Full Frontal Feminism. She writes how wearing a skirt equates to asking to be raped in our current society and how horrible that idea is. Both the woman’s monologue and Valenti’s chapter maintains that a woman should wear whatever she wants without the fear of getting raped.

In the section “Eenie Meenie Miney Moe, Which Wave Are We in and How Do We Know?,” of Victoria L. Bromley’s  Feminisms Matter: Debates, Theories, Activism 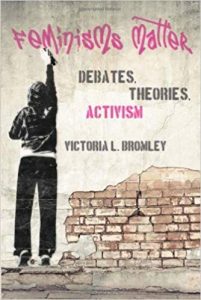 (2012), readers learn about the different waves of feminists and the different strategies
that each wave did. Eve Ensler, the creator of The Vagina Monologues, was a part of the third wave feminism which began in the 1990s. An activist tactic of the third wave was writing personal narratives. The production is full of personal narratives from hundreds of women who are sharing their experiences with their vaginas and their feelings about their vaginas.

Are you a WGS major or minor? Are you enrolled in a WGS course? Would you like to contribute to “Student Feature”? Email wgs AT hope DOT edu.