“Student Feature” is a new addition to the WGS blog. Student-scholars enrolled in WGS courses have consented to share their experiences inside and outside the classroom with the Hope community. Today, the “Student Feature” focuses on WGS 200 student-scholar Hannah Weller and her participation in the Women’s March in Grand Rapids.

On January 19, 2019, I attended the Women’s March in Grand Rapids. This march 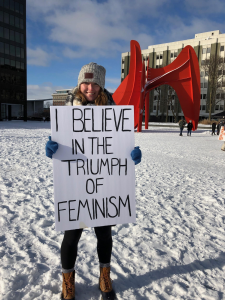 was just one of the thousands of Women’s Marches happening across the country. This one was small, but we were mighty. There were about seven or eight women who gave speeches and shared their stories of everything from child poisoning to sexual assault. We all listened, cried at times, and cheered during most of the event. After the speakers were done, we marched through Grand Rapids and were welcomed with women and men leaving stores and restaurants to either join us or to offer their support for what we were marching for. As we crossed the streets women yelled and honked their horns to show that they were with us as well. It was my first Women’s March and it was a truly beautiful experience to share with people I knew and with people I didn’t.

I learned so much from going to this event; I thought I knew a lot about feminism and standing up to the patriarchy but wow, I was mistaken. The women that spoke had faced so many hardships in life and I was stunned. One speech that really impacted me was one of a mother who was an undocumented immigrant from Mexico. She spoke about her firsthand experience of coming to the United States and how the stories we hear about the dangerous journey are true. But, she spoke about how she overcame all these difficulties in order to give her children a better life and now she is a proud owner of two restaurants in Grand Rapids. Another speech that really touched me was one of a student, who was a Mexican lesbian. She wrote a poem about what it was like to grow up and learn that the affection of a man is what makes you a woman and how she felt alone because she wanted the affection of a woman instead. It really made me think about how Latina and Black women really are judged more harshly if they are a lesbian or even transgender. The final speech that was fascinating to me was one by a sex worker. She talked about all the benefits of sex work and how new laws being put in place are making their jobs more dangerous. The new laws were supposed to be helping find victims of sex trafficking, but this is also affecting the websites that sex workers use to find and vet clients. Without the laws they had in place, sex work is now dangerous and homicide rates could rise against them yet again.

Feminism today is not what it was 20 or even 30 years ago. While I was at the march and listening to these women speak, all I could think about was how narratives have helped play an important role in feminism. In Feminisms Matter, Victoria Bromley discusses how feminism has changed over time and so have the tactics, but narratives remain important. In chapter 10, Bromley talks about the different waves of feminism and how in the second wave tactics like “guerrilla theater” were used as a way to share the narrative of feminism. In the third wave, they told personal stories about their experiences to show other women that they are not alone. Some feminists even wrote stories and novels under pen names to share their stories, since women authors were marginalized. Protests and marches are just another way of spreading feminism and showing why it is important. It shows why even men need to be feminists. The number of men I saw at the march helped reassure me that men really do care and they are willing to come out and do what’s right for women too. There were so many men that were there just to help lift their wives and girlfriends and friends up. Some were passing out hand warmers and extra signs because they wanted to show us that they support us and that they too believe in what feminism means.