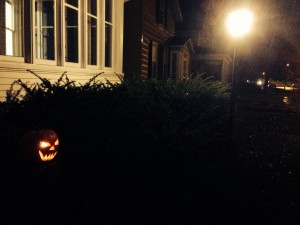 Well, I guess it had to come to an end at some point. Halloween’s officially over and gone with it is the month of October. November is alright… I guess. Aw, who am I kidding? It’s going to be a long, long winter.

Anyways, I figured I’d help battle my post-October depression by writing about what I did for the month of Halloween. That’s right, the month.

First off I beat Costume Quest. Boy, oh boy, was that a great game! I also went back and played Red Dead Redemption: Undead Nightmare and Castlevania: Symphony of The Night as well.

I watched all 31 movie reviews on Cinemassacre.com like I do every year, and I went and saw a showing of the original Night of The Living Dead that had a comedy commentary over it. That was DEFINITELY a highlight of the month since It’s kind of a one-of-a-kind event.

I drank more apple cider and ate more Count Chocula than I’d ever feel comfortable sharing (obviously), and I stocked up on more to last me until December.

The most substantial thing I did was watch a whole bunch of movies. I’m going to list them all since I really want to know how many I watched.

3. Halloween 3: Season of The Witch

11. Return of The Living Dead

Wow, 31 movies. That’s one for every day of October! Well, it’s been a great Halloween season and I’m already counting down to the next one.

I think I’ll end this one with a quote from the movie that started it all.