For two and a half weeks during the summer of 2018, Dr. Natalie Dykstra, senior Sarah Lundy and junior Michaela Stock worked at and established a partnership with the American Library in Paris. Their research and scholarship not only fed their own intellectual curiosity about historical stories and archival work, it also supplied the library with a useful resource as well.

Dykstra tapped Stock and Lundy to join her in France as part of a Hope’s Paris Stories project, an interdisciplinary Grand Challenges program funded by the Mellon Foundation. Focused on art, literature, history and senior seminar course work, Paris Stories is also co-directed by Dr. Lauren Janes of the history department and Dr. Heidi Kraus of the art department who lead a May Term to Paris each spring and teach Francophile courses, along with Dykstra, back at Hope during the academic year.

So it was then under Dykstra’s guidance that Lundy and Stock took on their own extensive archival endeavor regarding Nadia Boulanger.

At the American Library in Paris, though, Dykstra helped launch Lundy and Stock into a world of research that the professor knows well. Dykstra’s own writing has required extensive archival work; for her 2012 book, Clover Adams: A Gilded and Heartbreaking Life, and currently for her upcoming biography of Boston’s Isabella Stewart Gardner.  So it was then under Dykstra’s guidance that Lundy and Stock took on their own extensive archival endeavor regarding Nadia Boulanger, a mid-20th century French music teacher and composer who left a large collection of records, concert programs, sheet music and inscribed books to the American Library in Paris.

“When we went in, we had no firm idea of what project we would be doing,” says Lundy, a history and French double major. “It was very flexible, and we started with plans to just see what the library needed us to do.”

When they discovered that the library had a substantive special collection of artifacts associated with Boulanger that needed a detailed finding aid, the trio knew they were onto something good.

‘Since we’re all kind of art and history nerds, we were pretty excited,” exclaims Stock, a recording arts major with French and art history minors. “Sarah and I went page by page through about 42 [items] Nadia left and transcribed both the French and English inscriptions from Nadia and from her friends.”

“In essence,” Stock continues, “it was a lot of compiling of the smaller stories we found into a bigger picture of what the American Library in Paris means in the story of Nadia Boulanger. And that story also had a greater context to the history of France and in World War II. So, it’s one of those things that history does: You ask one question, and you can get a million answers.” 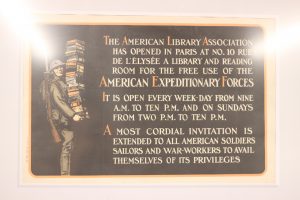 The American Library in Paris was established in 1920 by the American Library Association with a couple thousand English language books that had been sent to American soldiers during World War I. That founding spirit is reflected in its motto: “Atrum post bellum, ex libris lux: After the darkness of war, the light of books.”

Over the years, a who’s who of American writers, such as Ernest Hemingway, Gertrude Stein and Thornton Wilder, have graced the library’s rooms, and it became a cultural center as much as a repository of books used by French nationals to teach English to their students. Today, the library — the largest English-language lending library on the European continent and located not far from the Eiffel Tower — has over 100,000 books in its holdings.

About Boulanger, Lundy and Stock learned much and grew to appreciate their protagonist’s high regard as a female composer and educator in France and beyond. Educated at the Paris Conservatory in the early 1900s, Boulanger later taught both American and European students, such as Aaron Copland and Igor Stravinsky. She also became the first woman to conduct the New York Philharmonic.

Beyond the finding aid, the duo created a website about their archival work and partnership with the American Library in Paris.

For Lundy and Stock, their Paris experience went beyond factual understanding and fostered intellectual and personal growth.

“Some of the librarians (at the American Library in Paris) said to me toward the end of our stay, ‘Where did you get these students? They are great!’,” remembers Dykstra. “I could not have been prouder of the work that they did. They arrived every morning just as the library was opening up and they stayed until closing. I think their work ethic was just remarkable.

“There’s nothing I enjoy more than having a project like this with our students,” Dykstra continued. “For me, it pushes me as a teacher, as a writer, as a biographer. I think faculty grow as much as students do having these experiences. I’m very grateful to the Grand Challenges program for providing us with the funding so we could make this relationship with the library possible. I’m also grateful to my Paris Stories partners, Lauren Janes and Heidi Kraus.”

For Lundy and Stock, their Paris experience went beyond factual understanding and fostered intellectual and personal growth.

“I love stories. I think it’s the thing that makes me love history,” explains Lundy. “But having so many different cultures and people and perspectives coming together in our Nadia research was really eye-opening. To have a hands-on experience where you’re immersed in that narrative and can see even a fraction of a person’s and of a history’s timeline is something that makes me say, ‘This isn’t all of it but it’s an important part of the overall story.’ Then I think, what does that say about our culture here or a different topic historically where one person’s biography or a narrative is written. There’s so many ways you can apply what we learned even though it was in Paris.”

“I have dreamed of living and working and being in Paris for almost my entire life,” adds Stock. “I felt I was my fullest, best self over there, and I think I’ve carried that experience home. This (fall) semester has been by far the best I’ve ever had and I highly attribute that to finding myself in Paris and figuring it out alongside mentors, both student and professor. So for me, it was definitely an internal surge of growth that I will never forget.”