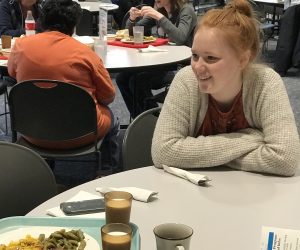 Junior Spanish and international studies double major Kelly Fuhs is not shy, but she is not forcefully bold either. Rather, she is calmly outgoing, and that trait has helped her use a second language in a meaningful way for a relatively new class. Complete strangers have become new friends to Fuhs as she has served others with Spanish outside of Hope’s campus.

Enrolled in “Spanish for the Community” and serving at the Community Kitchen Free Lunch program hosted by Community Action House at Hope-neighbor Western Theological Seminary, Fuhs recently introduced herself to a middle-aged gentleman named Juan and asked about his day. It was not going well, Juan said. Fuhs’ eyes and voice conveyed concern, and she gently asked Juan why, sliding easily into a chair next to him to begin a Spanish conversation with the Holland resident who was preparing to eat his lunch.

Juan did most of the talking so Fuhs listened and listened. Often she would nod; occasionally she would interject. When the conversation began to wane, she asked Juan if she could pray for him.

“Spanish for the Community” is a 300-level course created and offered by Dr. Berta Carrasco, assistant professor of Spanish, for its second time ever.  It gives students the opportunity to apply their Spanish skills in various interpersonal and organizational ways with Holland-area charitable organizations like the Community Kitchen, Community Action House, the Holland Free Health Clinic, and Holland Community Health Clinic. In doing so, students gain enhanced language ability, confidence and a sense of purpose.

“Basically, I came in thinking I was going to be serving food,” Fuhs explains. “But since there was a lot of volunteers to do that already, I help with translating menus and the code of conduct policies in Spanish. But most of the time, I just come in and talk to people and hear about their days and their lives and just kind of go from table to table listening to people.”

So, why is that meaningful for Fuhs?

“Every time I walk into this place, I’m welcomed,” says Fuhs, who hopes to work for a non-profit organization someday. “Everyone treats me like family and they’re like family as well. They all want to talk. Getting to sit down and hear about their lives and about their struggles and joys and just getting to pray with them and really have that small time to experience life with them, it’s an honor honestly. People just want to be heard. I didn’t come in here thinking, ‘Oh, I’m going to save people.’ I have a lot to learn from them.”

Carrasco created the class for students like Fuhs because she wanted to fill a gap. While there are plenty of Spanish offerings in literature and culture in the Hope curriculum, there was not a practical offering that engaged Hope students in the Holland community, which is 38% Latino. “Our courses are dynamic, but we needed a class that goes into the community,” the professor says.

Students spend the first five weeks of the semester in the classroom discussing (always in Spanish) what it means to serve, why they want to serve, how complicated and difficult it can be. They also learn about interpersonal communication styles in the Latino culture, how to be cognizant of direct vs indirect communication, such as how to “read” body language and vocal tones. Then, for the rest of the semester, for six hours a week, they speak Spanish in the community.

“Our students have worked for years on their Spanish,” the professor says, “and with this class, they can use it immediately outside the classroom. They have ways to use a tool they’ve worked really hard on right now for good use.”

“I love taking literature classes and learning more about the technique of the language, but there’s something really special about being able to take a class to learn skills about how to communicate with people within the culture and then interact and actually do it,” Fuhs confirms.

Senior classmate Rebekah Rainwater concurs. She is a Spanish major on a pre-physical therapy track and as such, she is grateful for learning how to succeed in intercultural communication, especially since she hopes to work in health-care settings with a wide range cultures, races and socioeconomic statuses.

“Working at the Holland Free Health Clinic for this class has showed me how to accommodate for those patients who do not speak English, who cannot read, and who have had little to no formal education,” Rainwater says.  “As a future health care provider, I will need to continue to practice the skills which I am developing now in order to successfully serve my patients.”

With those words, Carrasco knows her teaching objectives are being met. She wants her students to know that their language skills are useful now, not just some nebulous time out in the future and not just away from campus on a study abroad trip.

“Our students have worked for years on their Spanish,” the professor says, “and with this class, they can use it immediately outside the classroom. They have ways to use a tool they’ve worked really hard on right now for good use.”