On exhibit in the first floor of Van Wylen Library is a unique gift of Chinese landscapes by Madame Chiang Kai-Shek. This edition of Chinese landscapes is a private personal edition published around 1962 and personally inscribed in 1976 to George Zuidema, who recently donated his edition to the library. It includes 24 landscape lithographs. The paintings depict the serenity of nature and Chinese culture, an interesting contrast to the tumultuous life of Madame Chiang.

Madame Chiang Kai-Shek took up painting around 1953, relatively late in life. She first exhibited her paintings at the age of 102 in January 2000 at the World Journal Art Gallery in New York and in February 2000 at San Francisco’s Asian Art Museum.

Mayling Soong was raised as a Christian and graduated from Wellesley College in 1917. She later married Chinese nationalist general Chiang Kai-shek who led China during World War II but fled China in 1949 to set up his government in exile in Taiwan after losing a civil war to the communists. Madame Chiang Kai-Shek took a leading role in nationalist politics and was influential with the U.S. government. She became the first Chinese and only the second women to address a joint session of Congress, where she sought to increase support for China in the war against Japan. 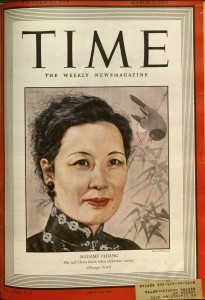 The Van Wylen Library has many books about Madame Chiang Kai-Shek including:

The library’s collection also contains writings and speeches by Madame Chiang Kai-Shek and recordings of her addresses to Congress. For more information, see the Hope College press release.