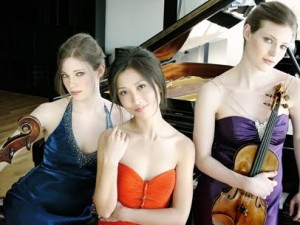 The Claremont Trio will perform at Hope on Jan. 27 as part of this year’s Great Performance Series. The trio, composed of twin sisters Emily (violin) and Julia (cello) Bruskin and Donna Kwong (piano), formed in 1999 at The Juilliard School. Since then, they have been featured in radio and television programs in the United States and abroad, taught master classes at places such as Duke University and the Boston Conservatory, and performed in locations such as Carnegie Hall and Avery Fisher Hall in the Lincoln Center in New York.

Interested in hearing some of the trio’s music before their performance? Van Wylen has copies of the group’s CDs Trios Op. 49 & 66, Shostakovich & Arensky Trios, and American Trios in addition to the CD Jonathon Cohler & Claremont Trio, which features both the Claremont Trio and three other artists.