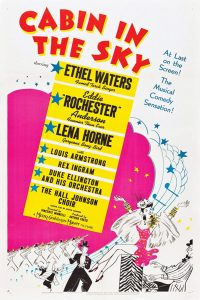 If you look at the Knickerbocker Theatre lineup for classic musicals, don’t be alarmed if one of them does not ring a bell.  Sure, we’ve got Elvis in Jailhouse Rock, the big musical, Sound of Music, and even something fairly recent, Grease (“fairly recent” is defined as anything that I actually saw in the movie theatre). But, Cabin in the Sky?

Chances are, you’ve never seen Cabin in the Sky. But if you do go to the July 29 performance you’ll see why we picked a film that includes music performances by Ethel Waters, Lena Horne, and the Duke Ellington Orchestra. Even Louis Armstrong is in it, but he only plays that trumpet for around 10 seconds — the rest of the time he is a junior devil. (He did play a solo version of “Ain’t it the Truth,” but the number was cut from the final production!)

The film was released in 1943, but because of its all black cast, the film was not shown in parts of the country. Then the movie disappeared from rotation and it wasn’t until 2006 that Warner Home Video and Turner Entertainment finally released it on DVD. The film was recently highlighted on Turner Classic Movies when guest host, director  Ava DuVernay (Selma, A Wrinkle in Time) selected it as an “essential” film.

I’ve now seen the film several times and can list it among my favorites (which, admittedly, is a long list). Waters is incredible and her rendition of “Happiness is a Thing Called Joy” (which was nominated for an Academy Award) is how a love song should be sung. Horne is a temptress who uses her beauty and voice to go after Joe. But not too much of her beauty since a scene featuring her in a bubble bath was cut from the film because, according to Horne, a black woman singing in the bath was not morally acceptable in 1943.

And then there is the dancing. One amazing scene shows people entering a nightclub, but they do not just walk in — they dance in and every one of them is great. Inside, the dancing is no less amazing and John Bubbles, the “father of rhythm tap” tears up the number “Shine.”

And, just in case you think Michael Jackson invented the moonwalk, watch closely when Waters sings “Taking A Chance on Love” and you’ll see Bill Bailey do a short “slide back” in what is considered the first recording of what is later called the Moonwalk.

If you want a fuller version, click here to see Bailey at the Apollo Theatre in 1955. [Even more trivia — Bill Bailey’s sister is the singer/actress Pearl Bailey.]

So, we have a musical with great singing, great dancing, and great songs. What more could you want? How about Eddie “Rochester” Anderson, best know as Jack Benny’s sidekick (“Oh, Rochester”) and a great actor in his own right. He even belts out a song (and I mean belts out!) with that gravelly voice and shows off some subtle dance moves.

The film is based on a hit 1940 Broadway play. Anderson plays Little Joe Jackson, a gambler who tries to reform for his incredibly patient and loving wife, Petunia (Waters). But when he is shot over a gambling death and is near death, Petunia prays for him to get to heaven. An angel appears as devils are ready to take him to hell and they make a deal — if Joe can live a good life for six months, he goes to heaven. The catch is that Joe does not know about the deal. While the angel counts on Petunia’s faith to save Joe, the devils use Sweet Georgia Brown (Lena Horne) to draw Joe back to his evil ways. It is a classic morality tale which does not veer away from Christian themes.

Cabin in the Sky was the first movie directed by the legendary Vincente Minnelli who went on to direct hits such as “Meet Me in St. Louis,” “Gigi,” “Brigadoon,” “Father of the Bride,” and “An American in Paris.” He married Judy Garland after “Meet Me in St. Louis” and is the father of Liza Minnelli. He was concerned enough about being a white man directing a black film that he submitted the script to the NAACP prior to its release to make sure he was avoiding stereotypes. A letter from the NAACP sent a note to the writers  “congratulating [them] on the treatment of this black fable, which avoided cliches and racial stereotypes.”

Read our press release for more information on all the films.