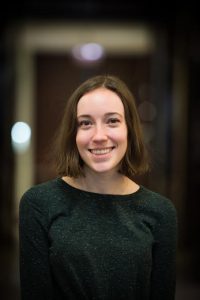 Emme Veenbass ’16  graduated with a double major in Women’s and Gender Studies and English. Currently, Emme works with the Chicago Bar Foundation, and she cites the WGS Program as the “most formative part of [her] college career.”

I am currently the Development and Administrative Coordinator at The Chicago Bar Foundation which is the charitable arm of The Chicago Bar Association. Essentially, we raise money for grants to give out to legal aid organizations across Chicago. Before my current position, I was in graduate school at DePaul University for my Master’s degree in Women’s and Gender Studies which I completed in June 2018. Both Hope and DePaul’s programs motivated me to go into a position that was focused on social justice and issues surrounding inequalities.

Did you major/minor in WGS, and if so, how did your WGS major/minor/certificate shape you? If not, how did you come to WGS as an academic discipline?

I majored in WGS alongside English Literature. Being a part of the WGS program was the most formative part of my college career and shifted my plans for after graduation. It provided me with a new lens for how I view the world and to be a more critical consumer of the social structures and systems I participate in.

Absolutely do it! The most common concern or criticism I hear for earning a degree in WGS is that “It’s not practical,” but that is the farthest thing from the truth. The skills and knowledge you learn in WGS support all aspects of your life from personal relationships to employment and beyond.

I would teach “The Personal Is Political: An Exploration of the Impact of Feminism in U.S. Politics,” and I would have to include Angela Davis on the syllabus. If you haven’t read Davis’s Freedom is a Constant Struggle: Ferguson, Palestine, and the Foundations of a Movement (2016), what are you waiting for?

I referenced Dorothy E. Roberts’ Killing the Black Body: Race, Reproduction and the Meaning of Liberty (1997) in almost all of my graduate school papers, and it’s a great critical examination reproductive injustices women have endured and continue to endure in the United States.

Are you a WGS alum who would like to be featured on our blog? Email us! wgs AT hope DOT edu