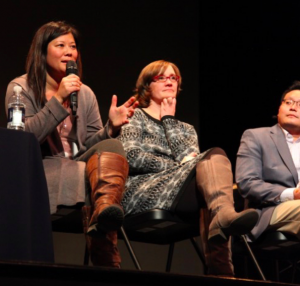 This Wednesday was the official kickoff for the 2017 Big Read. The book this year is When the Emperor was Divine, a heartbreaking and endearing story about a family that is forced to live in a Japanese internment camp during WWII. The novel, written by Julie Otsuka, explains the story of her family history and the history of so many Japanese Americans during this time. The kickoff, held at the Knickerbocker Theater in Downtown Holland, featured three speakers from the Hope College community. The first speaker, Dr. Wayne Tan, started his lecture by telling the stories of Mr. Kobayashi, a textile merchant, and Mrs. Aihara, a farmer’s wife. Both seem like insignificant people, but their stories are part of the rise and demise of the Japanese empire. The rest of his lecture focused on the emperor and the mythology surrounding him.

The second speaker was Dr. Jeanne Petit. Her discussion centered on the historical insights of the novel. She specifically focused on the Japanese migration and how the Johnson-Reed Act of 1924 made the immigration problems worse for the Japanese Americans.

The final speaker was Amy Otis-DeGrau, a third generation Japanese American citizen whose family was placed in an internment camp 75 years ago. She talked about the powers of silence, knowledge, and voice, and how it is our responsibility to make sure that these don’t get overlooked. Her personal story was so impactful and heartbreaking that the heavy emotion could be felt throughout the entire theater.

The biggest takeaway from tonight’s kickoff was learning how important When the Emperor was Divine is to read in the current state of the world. It can teach us to have empathy for others and learn about a part of history that is often just a paragraph in a textbook. There is so much about the Japanese internment camps that were created during WWII that we don’t even know about, but this book will bring that to light. The kickoff event was filled with not only students, but Holland community members as well, all eager to listen and learn. This is one of the best things about the Big Read is that it brings people of all ages and backgrounds together, and it helps us learn not only from the book, but from each other as well. This kickoff event showed how eager the community is to begin this month of learning!

Lauren is a senior at Hope College, majoring in English Literature with a minor in communications. When she’s not in class she can be found at any sporting event, walking around a bookstore, or sipping a peppermint mocha latte.