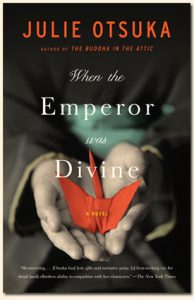 The Big Read Holland Area will return this fall, supported for the fourth consecutive year by an award to Hope College through the NEA Big Read.

This year’s program at Hope, running across the first three weeks in November, will feature Julie Otsuka’s book When the Emperor Was Divine.

When the Emperor Was Divine transports readers to 1942, as it tells the story of Japanese-American internment from five points of view. The NEA’s website for the Big Read says that the book “not only invites readers to consider the troubling moral and civic questions that emerge from this period in American history but also offers a tale that is both incredibly poignant and fully human.”