Homer is a Greek poet born between the 12th and 8th centuries BC. Scholars know very little about Homer other than the fact that he wrote both The Iliad and The Odyssey.

What is an Epic Poem?

Both The Iliad and The Odyssey are epic poems. This means that the texts are book-length stories in verse form. Epic poems typically retell a person or group’s heroic journey as they complete superhuman deeds and go on adventures.

Where Does This Story Take Place? 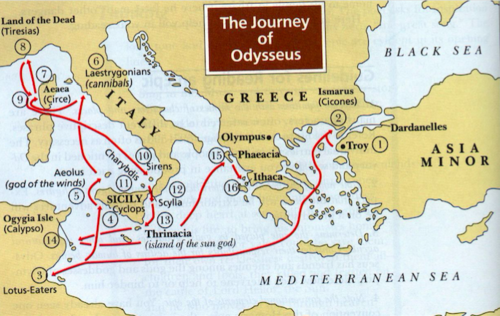 The Odyssey mostly takes place on and around the Aegean sea. The Trojan war took place in Troy, believed to be a place in modern-day Turkey, and Ithaca is a Greek Island located off the coast of Greece.

The Trojan War was a conflict between the Greeks and the Trojans. It is not known for sure if this conflict actually happened, but in Greek Mythology the conflict began when Paris, the son of the Trojan King, ran away with Helen, the wife of the Spartan king.

The Iliad takes place 10 years into the Trojan War and follows the Greek hero Achilles, while The Odyssey begins after the Trojan War is over and Odysseus journeys home to Ithaca.

Which Characters Show up in Circe?

Odysseus- the main character of The Odyssey who was a favorite of the goddess Athena. This epic poem tells the story of his journey back home to Ithaca after the Trojan War

Telemachus- the son of Odysseus and Penelope who tries to protect his mother from various suitors in his father’s absence. After his father’s death, he arrives on Circe’s island and marries Circe

Circe- a nymph and enchantress who turns sailors into pigs when they land on her island. Odysseus landed on her island in The Odyssey and stayed with her for a year before resuming his journey

Telegonus- the son of Circe and Odysseus who left Aeaea, Circe’s Island, and accidentally killed his father with a poisoned lance. After his father’s death, he married Penelope, Odysseus’s widow