Professor Perez, known as Rich, quirky and kind, radiated a welcoming, creative presence as I took a seat across from him in his office. There is no question this Hope College professor is determined to bring diversity and edge to the program.

Before he began teaching at Hope in 2013, Rich worked as Associate Artistic Director at Chicago Dramatists. His previous experience includes actor traini 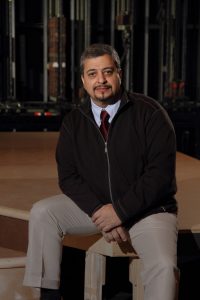 ng with Uta Hagen in New York, leadership of the Bloomington Playwrights Project in Indiana for seven years, and a season as an acting apprentice at Actors Theatre of Louisville. (Just to name a few credentials.)

With a passion for inclusion, Rich often dedicates his time and efforts to produce diverse, thought provoking theatre and this summer was no exception. As a part of the Latinx community, Rich found the perfect project to continue achieving that work.

This past May, Rich went to Chicago to direct Water and Power with the Urban Theatre Company (UTC 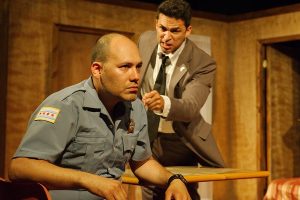 ) This play, by Richard Montoya, was originally set in Los Angeles. In order to make it more relevant to a local audience, Montoya adapted the script to take place in Chicago for the UTC production. The theatre rests in a cozy little storefront in the middle of Humboldt Park, a predominantly Puerto Rican neighborhood.

Water and Power grapples with the questions of politics, power, and what it means to be “good”, in a society that often blurs the meaning of those words.

Rich stands behind the notion that “in order to diversify the audience, you must diversify the plays.” As a man who grew up in California of Mexican heritage, and has lived in a variety of places such as New York, Kentucky, Indiana, Illinois, and Michigan, Rich has encountered many cultures in his communities. “We enter relationships with preconceived ideas of who certain people are. Perhaps it would be easier to get along if instead we sought out our similarities instead of our differences.”

This season at Hope College, Rich is directing the play Human Error; a complex comedy that wrestles with the complexities of divisiveness between progressives and conservatives. Rich ended our interview stating, “If nothing else, theatre should initiate lively conversation, long after you leave the playhouse.” For more details about our production of Human Error click here.