Every fall, a number of students from various disciplines within the Theatre Department step off the stage and out of the wings to take on a new role- director. The Directing I class primarily focuses on how to interpret a text, collaborate with artists from all realms, lead a rehearsal process, and combine all of these skills to put together a 10-minute play.

The class is taught by faculty member, Richard Perez, who began his career in the theatre as an actor. Perez says he discovered his passion for directing, “…more by chance. Other actor friends who needed somebody to look at, maybe a monologue, or a scene they’re working on, I would look at it for them. They would come back and say, ‘hey, you kind of know what you’re doing’ and I always enjoyed it. I also always enjoyed being in the classroom, and I knew being a teacher would be my long term goal, but I wanted to be the best actor and theatre person I could be before I came to that.”

While being novice directors, the students found that their backgrounds in theatre have given them a better idea of their personal expectations. “I like to think of the director as the hub of communication for a production,” says junior Victoria Ward. “They have to be able to speak all of the languages necessary to bring everyone together successfully, so for me having backgrounds in acting, lighting and stage managing means that I can speak their language better to help convey the designer’s idea. It also helps me when I’m thinking about aspects like blocking. How will the lighting, costumes and set influence my actors? What should I be asking of my stage manager, knowing what their job entails?” The directing class also discovered that their particular emphasis of study has given them a certain focus for their work in direction. Senior Nils Fritjofson says, “Coming from a primarily technical background has definitely caused me to focus more on the practical side of directing; so I think more about scheduling, how people are entering, where props are going, and the location of scenic elements, than most people.”

Before jumping into directing their own productions, the students had the opportunity to work with the Acting I class. They were each assigned two Acting I students and a scene to direct. Victoria Ward says, “I was very excited because I thought I was going to feel similarly to when my friends and I would work on monologues before auditions, and I was very wrong. All of a sudden I felt like a new parent with this child to raise.” While this was an entirely different experience for the Directing I class, Perez says that at this point in the process they usually realize that, “They know more than they think do. Everything you’ve experienced as an actor, that comes back to mind, and you have to trust your instincts. I think it takes a long time to do that, as any creative person knows, but more often than not I think we have really good instincts and we have to pay attention to them.” Ward explains that she gained more confidence in herself as a director as the rehearsals continued. “Once I established how I wanted to go about the process and started working with them and asking them the big questions so that they could be the ones to make the decisions, I think we all felt more comfortable.”

Having finished working with the Acting I class, the students are now tackling their 10-minute plays, which they have already chosen. Perez urges his students to find a work that really speaks to them. “If they just think it’s funny or it’s cute or it’s intense, and if it’s not really something that they feel they can uniquely tell, then why do it?” The students of course all have different things they looked for when choosing their piece. Nils Fritjofson says, “I was looking for a scene with an interesting and unusual premise, that would still be relevant to an audience our age. Scripted, the piece that I chose, follows a young couple struggling with life’s meaning after discovering a script of their entire day on their nightstand.”

After the students selected their plays, the next step in their storytelling experience was casting.  Perez tells his class that the most important thing to look for while casting is, “…actors who take direction well. You may have an actor who comes in and auditions really well but then you get into the rehearsal process and they’re pretty much stuck in that place, which certainly doesn’t serve the piece. It’s important to really work with them to see if they can listen.” Perez also urges his students to look for actors who have chemistry with each other, and who know how to be good scene partners.

Directing I is truly a unique course for theatre majors, as it is often the area of theatre that students have the least experience in. Through the process, Fritjofson says he has learned that, “…directing a scene is a journey that the director and actors go on together, and one that involves a lot of trial and error. Discoveries are shared experiences. Establishing an open space where failure is okay and ideas are encouraged allows for discoveries to occur more often and more naturally.” 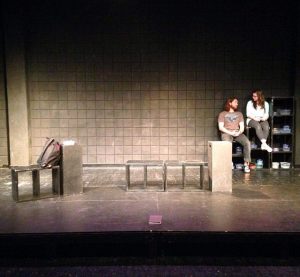