This Saturday night at the Knickerbocker Theatre on 8th Street, the documentary Poverty, Inc. was shown for any Hope students, faculty, or Holland community members who were interested in attending. Sure enough, there I found myself, on Saturday night, with some friends of mine watching a film on worldwide poverty.

Over the past few years, as my love for the nation of Haiti has grown, so too has my love for seeking articles, video clips, and books addressing the social issues (specifically poverty) that plague our world today. Most people, like me, and like the producers of Poverty, Inc. recognize that something was seriously flawed with the way our government – and other governments for that matter – are handling the issue of poverty. Now, I am about to offer up some of my own opinions and thoughts after watching this movie; I apologize if I hurt your feelings, but here it goes.

I can remember a friend of mine, David Henderson, asking, (I’m paraphrasing here, Dave) “Why is it that teenagers like to go to third world nation orphanages? I struggle to see any motivation beyond the Instagram picture they’ll post, that well, using an orphan sitting in their lap as a tool to gain more ‘likes’ and attention.” Two things before we move forward: 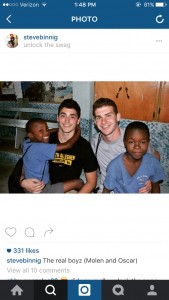 That being said, when I went to Haiti in 8th grade for the first time, it completely changed my life. That experience shaped me. It opened my eyes to the world around me, and made me realize that life was A LOT bigger than what my middle school girlfriend thought about me. Not to put my words into their mouths, but I’m sure guys like David, Cole Constantino, Will Petraglia, Rich Rafferty, and many others would tell you the same thing.

We all came back excited, changed, and we wanted to tell EVERYONE about it. Thus, our trip was all over social media. Allow me to make something very clear: I have no problem with kids sharing pictures, telling stories, and posting anything regarding their last missions trip. Missions trips are awesome, they should make you excited, and they should change your outlook on life. I’d be a ridiculously large hypocrite if I tried to tell you that I am not a living example of that.

Now back to Poverty, Inc. A mentor of mine, Daren D’Ippolito (He’s a Calvin grad, but still a great guy), told me I reminded him of a “young Roger Ebert.” For those of us born in the late 90s, Ebert was an extremely opinionated movie critic (I had to look it up too). I am by no means comparing myself to one of the most well-known movie critics of all time, but none-the-less, here was my concise opinion after watching the film:

Overall, the filmmakers did a very good job of simplifying some extremely complex issues on poverty so that the typical movie-goer could understand and grasp the concepts.

Like I said before, it doesn’t take a genius to figure out that our past efforts to eliminate poverty have not come to fruition. By no means am I saying that it isn’t our place as fellow men and women to come alongside nations like Haiti following natural disasters like the earthquake in 2010. However, it’s 2016. I’ll be in Haiti again in a little more than a month and will still see plenty of NGO trucks, dumpsters and wells branded with the logos of charities and non-profits, and numerous packages boasting the “American-Grade” subsidized rice (rice has been around for a while, the movie will explain that). Not to mention, Cap Haitien is a little more than 80 miles north of Port-au-Prince, where the epicenter of the earthquake was. In its essence, Poverty, Inc. does an excellent job of plainly asking, “Why are we still there?”

Again, I know many American people that have done amazing things all over the world. People that have taken the time to learn the culture, language, and lifestyle of numerous countries and cultures. These people have gone out of their comfort zone, and have truly been an embodiment of Jesus “to the least of these.” I also want to make it known that I am simply a Hope College freshman. I process by asking questions. Compared to the fearless men and women who have given up their sheltered realities and entered into areas of turmoil, I know nothing. Before I say anything else, I am neither bold, nor courageous enough to sacrifice my own time, funds, and family to do the things that many adults I know have accomplished in places like Haiti.

My only hope, as I Lord-willing am able to continue to play some small role in Haiti, is that our minds (specifically this generation of new thinkers and doers) for the poor would grow as great as the hearts we have for them. Those words come directly from Poverty, Inc. That film is going to play a massive role in educating all types of people, and opening their eyes to the harsh realities we have helped contribute to as Americans. Looking back on past events regularly shows us that there are things we would do differently if we could. There are so many small details regarding other nations and peoples that as “first world”, “educated” individuals we simply just do not understand. We’re human. We make mistakes, it’s in our nature. Such is life.

Poverty, Inc. also includes many success stories that remind me of some of my friends in Haiti. There are numerous corporations, non-profits, and charities that are handling foreign partnerships correctly. I believe it is our duty as young people to establish relationships with the “impoverished.” It is then, and only then, that we will realize they’re not the ones in need of sympathy or aid. Rather, it’s us.

Well. That’s about it. Rant over.

To my mom’s Facebook friends, prospective Hope students, or whoever happens to come upon this blog…know this: there are more than enough people who are ready to try and fix the issue of poverty, the right way. I think of a young guy like Ian Rosenberger (very similar to those people interviewed in Poverty, Inc.) who is beginning to establish himself in Haiti as a fellow entrepreneur alongside Haitians, not as an employer over them. Then there’s those even younger like Dave and Jack Henderson, Ben Schweiger, Charlie Byers, and many others who represent the next generation of humble, innovative leaders. Not to mention our current teachers taking the time to educate my generation, so that we would not come in with a great new idea or strategy; But maybe, just maybe, that we could learn from the past experiences of others, and help improve a system that initiated from some “really good hearts.”

There is still an immediate need all over the world. Even in downtown Holland, Michigan there are many who do not have a warm bed to sleep in, or substantial food to eat. It is still our duty to go. It is still our duty to serve. But first, let’s think. And let’s ask. As Poverty Inc. explained, it’s not like these people “are in love with the idea of living in Poverty.” They want to fix their situations as well. It’s our duty to help them accomplish their goals, not achieve their objectives for them.

When I come back from Haiti, and make one of those “all-too-typical videos” set to music encompassing the entirety of our trip, you can’t say I didn’t warn you. At the end of the day, I highly encourage you to watch Poverty, Inc., and before you ask, when it comes to TOMs shoes, I have 3 pairs.