As a first year student here at Hope College, I have had the opportunity to meet some pretty awesome people. From the soccer players, to Young Life leaders, and even the school chaplains; I feel like I know some of the most important people on campus. One of those important people is a buddy of mine named Sam Starks. Sam is the type of guy that everyone on campus knows, but in the good way. He is always quick to lend a smile to anyone in need, and just an outright joy to be around. However, for everyone who does not know Sam, he is one of the most competitive individuals I have ever met. That is why he is one of the distinguished leaders of Hope College’s loyal student section, the Dew Crew.

Most people familiar with Hope College know how much we love beating our Christian friends over at Calvin. Personally I have some experience playing in these infamous Hope-Calvin rivalry games, and trust me, the bad blood is very real. The Calvin soccer players are great guys, honestly. However, in my 16 years of playing, never before have I endured such a great distaste for another team. As one can probably imagine, this rivalry stretches across all athletics, but reaches its peak anytime the men’s basketball teams from Hope and Calvin respectively, square off.

Now, back to Sam. In Sam’s own words, if I was a true fan, this blog would have been completed a week ago while our victory over Calvin was still fresh. Taking this into consideration, Sam, I would argue that there is NEVER a bad time to remind our pals from Grand Rapids what it feels like to be, well, losers. (I mean that in the literal sense… they lost the game… don’t take that the wrong way.) Moving along, I never thought that I’d be a part of any student section that would top that of my high school’s. Yet, here I am, humbly admitting that the Dew Crew last Wednesday night was absolutely stellar.

You see, when you become good buds with a Dew Crew co-leader, weird things start happening. For example, I was in the DeVos Fieldhouse four hours prior to tip-off. Here’s a picture to prove it: 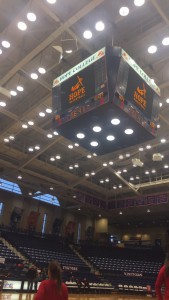 In addition, I find myself wearing all orange a bit too often, and scarves indoors. Again, some proof in the form of a picture: 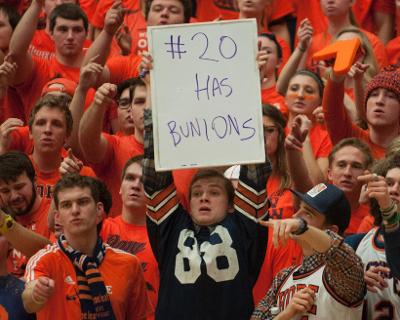 Turns out #20 on Calvin does not have bunions, Blake Johnson’s, (the good looking man holding the sign), resources were off. Nonetheless, due to my friendship with Sam, I had the best seat, (well spot to stand), in the house at my first ever Hope-Calvin basketball game. Special stuff wouldn’t you say?

So enough talk about all of these UNC-Duke, Auburn-Alabama, and Michigan-OSU games. One of the best rivalries in of all of college sports finds its home right here in western Michigan. You gotta be here to believe it.

So that’s all I have. The Hope-Calvin rivalry lives on, and now I get to play a part in it… and so could you. Just remember, whenever it feels like the world is caving in on you, and the end of life as you know seems all but definite… you could have gone to Calvin. It could ALWAYS be worse.

Have a great end to the week everybody! Go Dutchmen!