When Hope students hear that our men’s basketball team is
playing Calvin, people rush to DeVos to get a ticket for the big game. This
rivalry is unlike any other. It’s been going on for the past 93 years and 182
games in which each game against our rival is the biggest event of the year.
Orange body paint comes out, the Dew Crew emerges, and our 3-pointer man gets
ready to tape up a Mountain Dew cutout to the wall whenever Hope shoots a
3-pointer. 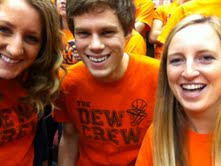 Men’s basketball is the best time of the year because the
student section and families from the Holland area are such huge
supporters—especially at the Hope vs. Calvin games. This was the case for this
past Wednesday. Only 200 tickets were given out for the game, which were gone
in a day because it is the most anticipated rivalry match-up. The games usually
are very evenly matched and are a real nail-biter when the last minutes
approach. However, that was not the case on Wednesday. Hope was struggling to
get on the scoreboard for the first half. Calvin was definitely dominating the
first half with a considerable lead, but it seemed as though Hope gained their
momentum leading into the second half, soon to be back in the slump at the end
of the game. Despite the huge rivalry, Calvin was the clear victor in this
particular game with a win over the Flying Dutchmen of 75-49.

In addition to the win that the Calvin Knights received, two Calvin students stole our Hope flag near the end of
the game. This just increased the rivalry between the two schools. It’s one
thing to win a game, but it’s another to take our “Go Hope” flag. The two male
students who thought it would be a good idea to take this flag from us ran back
to their dorm and took a picture of it, which was leaked to the Calvin website
and eventually found its way to Facebook and therefore, to Hope students.
Little did they know, their innocent bit of fun ended up being short-lived when
it was taken by campus safety.  The
whole article can be viewed at this site:

This minor incident just makes the rivalry between Hope and
Calvin even more interesting because Hope will be hosting the next game in just
a few short weeks. Maybe this little prank will backfire and silence the Calvin
Knights and show that Hope truly is the victors in this heated rivalry when
Hope gives Calvin a run for their money on February 9th! Hope to see
you all at the game!