Dr. Chuck Cusack, associate professor of mathematics and computer science, turns playthings into works of art embedded with his academic expertise. His Lego art show is now on display in the 602 Gallery at Holland Community Hospital through Tuesday, July 30.

Cusack’s works are unique and approachable — combining his love for combinatorics, the study of finite discrete structures, with algorithms and Legos, into creative abstract pieces of art that draw the viewer in with vivid colors and interesting patterns. He has been constructing Lego art for five years, and three of his works have appeared in ArtPrize — the international art competition held annually in Grand Rapids, Michigan. His current exhibit at the 602 Gallery, organized by the Holland Friends of Art, reveals an artist who has evolved from a very rigid application of mathematics in his work, requiring everything he made to be a direct representation of a mathematical object, to one that has been inspired by Piet Mondrian and Josef Albers. The results have “loosened up” Cusack’s creativity as he now sometimes chooses the aesthetic over the mathematical, even using the underside of Legos to show off their unique artistic lines and order.

“When I began, it was all about math and representing math using Lego. In a lot of my work people may not ever actually realize that there’s some structure to it other than the overall rectangles and colors,” Cusack says. “As people saw my art, particularly several people at ArtPrize a couple years ago, they would mention other artists’ names. I would look up those artists to see why people were mentioning these then. Mondrian is one that stuck out to me. I liked his work, but it was not very mathematical. But I thought, let’s just try something new and so I did a Mondrian-like Lego art and really liked it. I started doing ones that were more like Mondrian’s work but included some math in them.”

The works that Cusack creates do not come from a Lego kit found at your local retailer. Instead, his materials are methodically tracked down on the internet to meet his exact requirements. Between conceiving his idea, working out the math, ordering the Legos, sorting the Legos and finally creating the Lego art, Cusack says he can work up to 20 hours on a more complicated 13”x13” creation. For this second work in ArtPrize three years ago — a 6’x10’ Lego monstrosity that cost him “as much as a small new car” in materials — he cannot even begin to estimate its time value. What he can say though is that over the years, Cusack has purchased, handled and placed hundreds of thousands of Lego pieces. And he never uses glue.

“My works are vulnerable without glue but I prefer it that way,” he explains. “I’ve got to know exactly what I want to do and a lot of times I don’t and I want to pull them off. But more than anything, it seems wrong to use glue. It’s Lego. It’s meant to be removable.”

While there are 35 of Cusack’s works on display at Holland Community Hospital, several of his pieces are also hanging on Hope’s campus. His first ArtPrize piece called “Latin Square Squared” can be found outside the office of the dean for the natural and applied sciences in the Schaap Science Center. It is a 38”x38” grid constructed from many squares, each of different sizes and each of which is what is called a Latin square: every cell is a certain color (or shape or number) and every row and every column contains each color exactly once (like Sudoku). In VanderWerf Hall’s first floor computer science lab, Cusack takes a turn at participation art. “Yes It Is” is an orange-and-blue puzzle. To Hope fans, the colors alone may draw the viewer in. To computer science students, the work could pique their academic interest and, with a lot of work, increase their art collection, too.

“If someone can decode the message in ‘Yes It Is,’ they get it,” Cusack says. “Decoding it requires a Vigenere cipher, shift cipher, understanding a magic square, debugging code, some sort of binary representation, and maybe a rotation here or there, not necessarily in that order.”

“I hope the viewer will see that there is the beauty inherent in mathematics, and that serious art can be created using mathematical concepts and a very simple medium.” 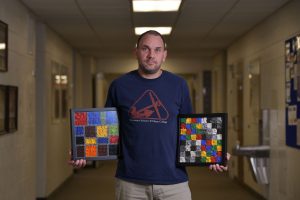 In the 602 Gallery, those who see his art do not need any understanding of math or computer science to appreciate Cusack’s colorful and creative work, though knowing that a deeper level of artistic intention exists in them makes their creation that much more impressive. “I hope the viewer will see that there is the beauty inherent in mathematics, and that serious art can be created using mathematical concepts and a very simple medium,” he says. “And I hope that viewers will come away from the show inspired to create their own art using whatever medium they find the most interesting and taking inspiration from whatever they are passionate about.”

An artist reception will be held on Friday, July 12 from 6-8 p.m. in the lower level lobby of Holland Community Hospital (green entrance). Cusack’s exhibit will be on display until Tuesday, July 30. Gallery hours are 24/7.

It's Lego art you don't want to miss! Stop by Holland Hospital's Gallery 602 on Friday, July 12 from 6 – 8pm to meet the local artist & @HopeCollege professor behind this unique artwork. #Gallery602 #HollandFriendsOfArt pic.twitter.com/Dj3B9xDDlv