We began day five with an early wake up call at 6:45. Everything was still wet outside due to the downpour last night. We said thank you and goodbye to Doña Rosa for her amazing hospitality in Platanar. One thing that she said, despite her broken English, that will stick with us forever is, “Christians are the happiest people.” Once our driver, Christian, arrived, we loaded up the bus to go to the canopy tour. We had breakfast there, but realized that there were scheduling issues with our reservations. We plan on going back tomorrow. Right from breakfast, we headed to the Baldi hot springs.

The hot springs were something you would see in a magazine. It was something we will never forget, and was the perfect place to “refill our bucket.” The water felt like a huge hot tub with waterfalls and water slides. It could be said that “the water slides would be illegal in the United States” -anonymous. The buffet for lunch was the closest thing to American food we have had in 5 days (it was delicious, but there was still no pizza or ice cream!) we stayed there for a couple hours after lunch, before we began the long trek to the AMCA house in San Jose.

On the 3 1/2 hour ride back home, we spent time really growing together as a team. Pushing people out of their comfort zones, and breaking down walls. We had a lot of laughs and made a lot of jokes, but we weren’t afraid to ask the hard questions. Reflecting on it now, all of us could say that the main purpose of this trip was to serve the people of Costa Rica, but this trip has also taught us more about ourselves and each other than we initially expected. To end the night, we had a late dinner and devotional that focused on the 1st commandment.

Matthew 6:34 – “Therefore do not worry about tomorrow, for tomorrow will worry about itself. Each day has enough trouble of its own.”

“Stop looking for things that make you comfortable.” 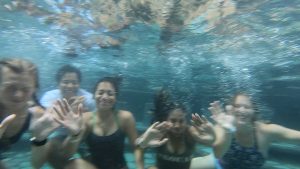