By Alli and Anders

“The organized chaos of Indian culture continued with a whirl today.  We started our day by having breakfast at one of the local’s houses, with traditional Boro dishes like til served alongside fresh omelettes.  We were shown the bio-sand water filters that many in the village use.  Although these filters provide mostly clean water, they still cause health problems for the villagers- including kidney stones and diarrhea from micro organisms.  Seeing what they used currently made our team even more excited to show them the Sawyer water filters we brought along.

The morning consisted of a martial arts demonstration (Wushu) and hanging out with the kids.  You could see members of our team starting to bond with kids, challenging them to a pull-up contest and monkeying around.  As the smiles got bigger and bigger, I sat on a bamboo log and grinned at the chaotic joy that I saw around me.  The love that we already felt for these kids was overwhelming, and a glimpse into what was to come.

As we began to assemble water filters for the village, each member of the team spent time hand-drilling holes into the buckets.  For me, this time in the center of the village was really special because it was a physical representation of the labor of love we wanted to provide for them. Drilling holes and spending time together as two cultures and one community was powerful, and something that I want to hold onto forever.  It was a small way that we could repay the labor and hospitality that the Boro people provided so generously for us.

We were able to demonstrate the assembly and use of the water filters in front of a large gathering from the village.  In actions and translation and gestures, we laid out the exact steps for filtering, backwash care and longevity.  We then gave buckets and the filtration systems to small clusters of people and helped them assemble them.  The villagers asked questions that we never would have thought of, and were insistent on going over the process multiple times so that they knew exactly what went into the assembly and functionality of the bucket system.  I was very encouraged by the engagement and responses of the people, as it was a display of their excitement and eagerness to care for the Sawyer systems.

In the somewhat overwhelming experience of village life, I was struck by the beauty of combined worship between two cultures.  We were instructed to pray out loud at the same time, and so you could hear the prayers of the Boro people, and our English prayers at one moment.  I truly felt God’s hand on our team, and the people we had gathered around us while we cried out hallelujah hallelujah in multiple languages.  Our God truly transcends the cultural and language barriers in unexpected ways.”

“It was evident right away how excited the children were to be playing sports with us today. Before the camp even started all of us were sweaty from running around with them. Although we had a few translators to help us give directions to the children, it was still difficult to communicate with the children directly. There is something special in not being able to have what we consider to be a normal conversation in the United States with someone that speaks a different language, because you begin to learn how to connect with them at the most basic levels of human nature. The beautiful thing about sports is that you don’t need to know the same language to play together. You find ways to communicate like giving a thumbs up or a high-five. At the end of camp today we played Monkeys and Rhinos (we changed the name from Sharks and Minnows) as a joint group, because beforehand we split the children up into groups by age and gender for stations. It was fun to see the girls and the boys play together and interact.

Tonight we had a worship service at the church and we were honored as their guests on stage with scarfs being presented to us. This is a customary practice throughout India. The people here are all so loving, kind, and are extremely gracious hosts. It was hard at times to let them serve us in so many ways, because we are here to serve them. But the best thing that we can do to honor them is to let them graciously host us.

We have all been so thankful for our time here so far and have cherished all of your prayers!”

The group is back safely in Bangalore and we will be updating the blog over time with details of the past few days.

By Hannah and Jacob

We woke at 2am to fly to Guwahati. When we got to the airport, there was close to a dozen lines for the men to get through security and only one line for the women. We were rattled by this norm because it is not something we have experienced before. In the United States, this experience would quickly be labeled sexist. Here in India, we came to discover, this separation was for the persevation of modesty (as only female officers worked in this section of the airport), which is an important and empowering aspect of the culture.

Upon arrival to Guwahati, we met Pastor Samuel, who always seems to be in a rush to do nothing. He rushed us from the church to different houses of the village to the ministry, and his urgency was softened with gentle English phrases, like “Please come, please come” and “kindly go, kindly go.” He would even ask us to not talk while we were eating so we would eat faster. His eagerness was energizing. In the times between our hustling, we got to share a lot of special time playing with the children.

After traveling to the direct opposite side of the planet and then traveling 6 more hours north, I discovered that Indian kids are in fact…kids. Upon our arrival to their small village of Uldagiri, the “language barrier” was pretty much shattered after the first juggle of a soccer ball. I didn’t juggle the ball cuz that’s just not what I do (extreme lack of foot-eye coordination), but by simply watching you could see that these kids wanted nothing more than to connect, and to have the opportunity to love and be loved. If the sweat stains on our shirts after the first half an hour of playing are any indication of our first sports camp set for tomorrow, it’s sure to be a blast (and wet). As we were packing up to leave for the day, “yellow T-shirt boy” (name to be discovered) tugged on my shirt, pointed sternly up at me, and said “Tomorrow. Come.” I will do just that my friend, I will do just that.

The group made it to Guwahati and Udigiri and we’re having a blast running sports camps and assembling water filters with the local church and communities. Internet access is limited here so we’ll post more updates when we’re back in Bangalore on Saturday!

By: Elizabeth Fris and Ryan Woodside

We made it to India!!! After a seemingly-endless couple of flights, we arrived at Bangalore’s airport and were greeted by JP, James, and the party bus we are traveling around on. On our way to the hotel, we were exposed to our first glimpse of traffic in India: loud horns, countless rickshaws, and meaningless lane lines and stop lights. After settling in at the hotel, we had breakfast at the restaurant in the lobby, which was a buffet of Semiya, lemon rice, idly, Sambar, aloo subjee, and puri, along with a small selection of more American options. Once we were all full and bewildered by “spice” being a word associated with breakfast food, we packed into the party bus and made our way over to World Cassette Outreach of India (WCOI), where we were all greeted with jasmine necklaces. JP’s family informed us about the history of their organization, starting with the original tri-fold cardboard record player that they would distribute in the 70s and finishing with videos of lepers and blind men telling stories of how their current work has changed their lives. India contains one thousand, six-hundred fifty eight languages. Many of these are used by a single family-line, and these languages are beginning to go extinct. The tragic loss of these languages accompanies the loss of their cultures, and WCOI is helping to honor and document these cultures. WCOI translates the Bible into close to one hundred of these, and we can’t wait to assist them in distributing these to the people of  Guwahati along with Sawyer’s water filtration systems and sporting equipment. We were treated to a traditional Indian lunch and were taught how to properly eat with our hands (which is suprisingly more difficult than you may expect), before heading back to the hotel for much-needed naps. Now we are busy anticipating dinner and struggling to contain our excitement to get back on yet another airplane at 2 AM! We are thrilled to go interact with the children in Guwahati and see the way that God continues to work on this trip!

By: Matt Reitsma and Abby Brinks

We have arrived in London! We have a short wait until we board our next flight to Bangalore. The first flight went well and everything went smoothly, but we are all anxious about this next one lasting even longer. We were happy to have a larger plane and to each have our own personal screen to watch movies, and are hoping we get the same experience in Our next 10 hour flight! Please keep us in your prayers as we complete the final half of our trip to India.

The last few days of training before departing were great, and allowed our team to grow closer and stronger! We shared meals, excitements and fears for the trip, and our personal faith journeys. The team is looking forward to strenghting our team unity further  with our time in India, and we cannot wait to see what God has in store for us! 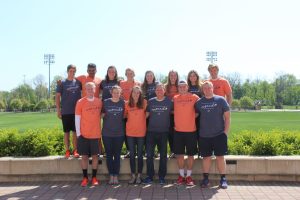 Meet our team heading to India to serve with Audio Scripture Ministries and World Cassette Outreach!

We’re excited to send our first SEED team to India on Saturday, May 13 to serve with Audio Scripture Ministries.  View the team calendar for a glimpse of how Hope College student-athletes will utilize their passion for sport to share the love of Christ with individuals around the world over the next two weeks!

It is our mission to equip Hope College student-athletes to serve as disciples who share the Good News of Jesus Christ through sport.

We recognize that sport provides an opportunity for athletes to have a significant platform from which to influence others. In traveling with the SEED program, Hope College student-athletes will utilize their passion for sport to share the love of Christ with individuals around the world.

Through participating in the SEED program, student-athletes will be intentionally challenged to use their experiences to sow the seed and water the harvest so that the Good News of Jesus Christ takes root in their own lives as it is shared around the world.