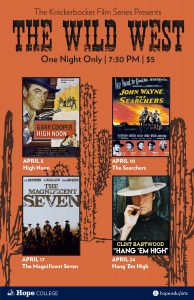 The showdown on a dusty street. The cool stare of death.  The flawed hero. The cold gun. The morality tale told in a new way. The Knickerbocker’s upcoming edition of its “One Night Only” film series features the Western genre. The films chosen represent a cross-section of the Western’s development from the 50’s through the 60’s using some of its most iconic films. In their own way, each of the four films selected represents a change in the development of this genre. 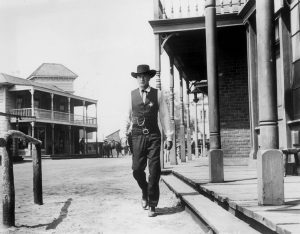 High Noon (1952) is one of two films in this series that represent the beginnings of the Western’s transformation into telling stories that are morally ambiguous, and more realistic in their portrayal of frontier life. Gary Cooper is newly married, retired Marshall Will Kane who plans on leaving town to start a new life elsewhere. When news comes that, Frank Miller, a man that Marshall Kane sent to prison, is coming in on the noon train to settle things with Kane, the Marshall decides he needs to stay and face the ex-convict. In the process, Kane discovers the various limits men are willing to cross when it comes to standing up and possibly laying down their lives for each other. The story becomes a tension-filled, Hitchcock-like suspense thriller as the clock steadily makes its way to the fateful hour of the showdown between the Marshall and his nemesis.
This classic Western trope of the gun duel in the streets is given a special twist in High Noon as we watch Cooper’s heroic character wrestle with his own cowardice and fear in the wake of the complete abandonment by people whom he’s considered friends and loved ones.  This sort of flawed hero was new to the genre at the time and it’s what gives “High Noon” its sense of rawness and reality.  This is a morality tale that explores the dark heart of human nature to the fullest. And it’s also one of the most suspenseful films in all of cinema not to mention one of the greatest Westerns.
Watch the original trailer.

The Searchers (1956) is John Wayne’s finest hour on film.  Wayne himself was known to favor this role as the civil war veteran Ethan Edwards as his best work. The Searchers represents another milestone in the Western genre’s evolution from simple campfire tales of good guys and bad guys to more realistic, complex and mature stories of the Old West. Ethan Edwards visits his brother’s ranch in Texas after the war with intentions of settling down, but an attack by Comanche Indians destroys these plans and propels Ethan and his nephew, Martin on a years-long search for Ethan’s kidnapped niece, Debbie. Along the journey Martin witnesses his uncle Ethan’s burning hatred for not just the Comanche who kidnapped Debbie but for all native tribes. Ethan’s hatred becomes increasingly all-consuming, obliterating any feelings of family or love or humanity. The nuanced performance by Wayne and his projection of menace brings great tension throughout the film and helps to create a dramatic ending, unlike any other Western film. The Searchers stands out ahead of its time for its exploration of racism, violence and true life on the frontier. It is one of director John Ford’s masterpieces, John Wayne’s finest work, and the best Western film of all time in my opinion.
Watch the original trailer. 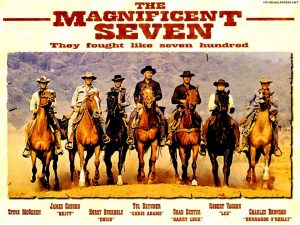 The Magnificent Seven (1960) is an epic western yarn with an all-star cast featuring Steve McQueen, Yul Brynner, James Coburn, Charles Bronson and Eli Wallach. The plot involves a Mexican village terrorized by a gang of bandits who come every year to steal the town’s meager harvest.  The village elders recruit a group of seven gunfighters to help them get rid of the bandits forever.  Each gunfighter comes to this mission with different motivations and therein lies the crux of the plot.  Yul Brynner was a fan of the Kurosawa film The Seven Samurai and was the one who stewarded the idea for an American version to be produced as a Western. The Magnificent Seven is one of the all-time great Westerns with a perfect mix of high drama, shoot ’em up action and spectacular camera work. Not to mention Yul Brynner and Steve McQueen at the height of their acting powers along with the legendary Eli Wallach as the smarmy, evil bandit leader, Calvera. The film’s score by Elmer Bernstein is a classic and its main theme is recognizable even today as a musical touchstone to the Western film.  Even the gang from Cheers knows it!
Watch the original trailer (with lyrics that Bernstein definitely did not write).

Hang ‘Em High (1968) is the Western that cemented Clint Eastwood’s legacy as one of the greatest Western actors of all time, second only to John Wayne, “The Duke” himself.  Up until Hang ‘Em High, Eastwood had starred in a series of “Spaghetti Westerns” that introduced a grittier, darker and more violent Western film to the genre.  Eastwood’s portrayal in them as “The Man With No Name” became a nearly instant Western icon with his cruel squint, cigar clenched in his square jaw, and serape coated with trail dust draped over his shoulders. He was the mono-syllabic, quick drawing anti-hero who changed the direction of the Western genre forever.
As with most every Western film, Hang ‘Em High, is a morality tale. In this story, Eastwood portrays former lawman, Jed Cooper, who is mistakenly lynched as a cattle rustler and murderer.  He survives, returns to his former job as a Marshall and proceeds to hunt down each of the men in the lynching party.  Hang ‘Em High, like many of Eastwood’s Westerns, presents no real satisfying answers and completely blurs the lines between good and evil. This is a hallmark of the modern Western film that still stands today.