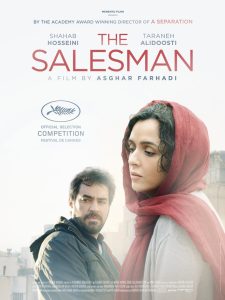 I have been a fan of Asghar Farhadi since we showed his Academy Award nominated film, A Separation, a couple of years ago.  The film’s powerful characters, compelling story, and intense drama reminded me of the power of film.  When we had the opportunity to book Farhadi’s latest film, The Salesman, I was quick to put it on the schedule.  And the film doesn’t disappoint.  The Salesman is nominated for the Best Foreign Film Academy Award and has already won over 80 awards from other films festivals.

It is a powerful drama that on the surface is the story of a young couple whose peaceful lives are disrupted by a tragedy in Iran, but below the surface, The Salesman speaks to many themes much more complicated.  At its heart, the movie is a morality play which examines the power of revenge and forgiveness, as well as offering an honest and revealing look at society and culture in modern Iran. Adding another level to the film is Arthur Miller’s Death of a Salesman, which is also a backdrop for the film.

The Salesman begins with a young couple, Emad and Rana, a teacher and his wife who are also starring in a production of Miller’s Death of a Salesman.  We first see them on stage in rehearsals for the play.  Then their normal life is interrupted and they are forced to find a new place to live.  Luckily a cast member has a vacancy in a place he rents and offers it to the couple.  What seems a stroke of good luck is actually where the problems begin.  Soon after they move in an incident happens — I won’t spoil anything — but it leaves Rana injured and Emad searching for the perpetrator.  Both of them struggle with how to deal with what has happened, but in very different ways.  As they try to come to terms the event and how it is affecting them, we see the increasing tension and distance start to appear in their relationship.  These changes seem most evident at the rehearsals for the production.  The play becomes the one place they actually communicate. As Emad’s quest for revenge builds, we are drawn into the differences between how he and his wife are dealing with this tragedy.  What follows leads us to a gripping and explosive final act.

The Salesman is filled with outstanding acting, but Shahab Hosseini (Emad) and Taraneh Alidoosti (Rana) present their characters with exceptional power and complexity.  And as they struggle to reach some sort of closure about what has happened, their performances become more and more compelling.  I can’t say that the production of Death of a Salesman and Emad’s role as Willie Loman parallels his emotional journey.  In fact, in many ways, he is the opposite of the character, but the production provides an outlet for the characters’ emotion, and it may be that Willie and Linda’s collapse in the play shadows the collapse of Rana and Emad’s life as well.  In the end, we are left with fewer answers than we want, but wiser for the journey.

The Salesman is in Persian with English subtitles and runs 2 hours and 5 minutes.