Those did not make the cut. Actually, we rarely have a catchy slogan as we think the films sell themselves. Our unofficial slogan for this next series of films is “the solid series” — a variety of films, all different, all strong. 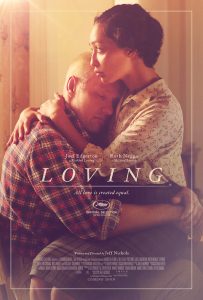 This movie was named the number three film of the year by Time Magazine, despite the fact that it was out on limited release. This fictionalized drama is based on the true story of the incredibly named Richard and Mildred Loving, an interracial married couple who took their battle to be legally recognized all the way to the Supreme Court. That it took until 1967 to have this happen makes the story even more amazing. The film is raking in award nominations and Manohla Dargis of The New York Times says “There are few movies that speak to the American moment as movingly — and with as much idealism — as Jeff Nichols’s Loving.” 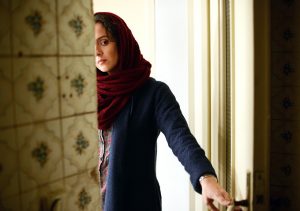 Asghar Farhadi. (He won the Oscar for A Separation which we showed 2012).  An Iranian couple rehearsing for a performance in Arthur Miller’s “Death of a Salesman” have to move to a new apartment. But the previous occupant’s past intercedes with their present, turning their lives inside out. Taking Best Actor and Best Screenplay awards at the 2016 Cannes Film Festival, Farhadi’s latest film adds to his legacy. Peter Bradshaw of The Guardian calls it “smart, ambitious…a well-crafted, valuable drama” and Deborah Young of The Hollywood Reporter says it “leaves the viewer tense and breathless.”
Watch the preview. 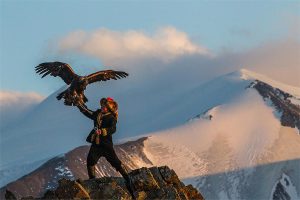 Just watch the preview and dare to miss this movie! The cinematography alone makes this a big-screen must, but the story of 13-year-old Aisholpan working to become the first female eagle hunter in twelve generations just adds to acclaimed documentary. This has the big themes — coming of age, women’s (girl’s) rights, the beauty of nature, the clash of ancient traditions and modern life, and, a glimpse into a culture few of us know. Receiving rave reviews, both the Los Angeles Times and New York Times named it a “Critic’s Pick,” with the NY Times saying it is “Thrilling! A movie that expands your sense of what is possible.”

Her husband is leaving her for another woman, her mother dies, and 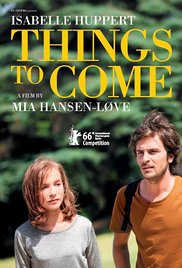 her professional life as a philosopher is in turmoil. Well, this sounds like a crazy comedy or a French film. And the winner is…French film! This unlikely plot line has a 100% rating by over 70 critics on Rotten Tomatoes and stars the incomparable Isabelle Huppert as the woman who decides not to fold under the challenges, but instead reinvent her life. Time Magazine says “Huppert is extraordinary—she reveals everything even when you think she’s showing nothing—and she’s the perfect actress, right now, for Hansen-Løve’s (director) fine-grained perceptiveness.” Time Out calls it “warm, thoughtful, surprising.”
Watch the preview.

We think you’ll agree that this is an incredible line up of films, likely to be heard about for years to come. We’ll feature each of these individually on the blog shortly before we show them, but please check out the trailers. And, tell your friends! You are the best advertisement we have for our unique film series. Thank you for supporting us and great films.