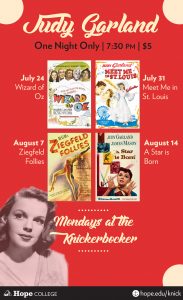 I remember getting to stay up late to watch The Wizard of Oz when I was in elementary school and being more interested in Dorothy’s friends and her dog Toto than I was of this plucky, jittery girl from Kansas whose only skill seemed to be singing mopey songs and skipping around.  Years later I grew to appreciate Dorothy’s adventure with more understanding and I even grew to love that one particular “mopey song”  for the masterpiece of bittersweet longing that it is.

None of that awakening would have come about if it hadn’t been for Judy Garland’s Oscar winning performance as Dorothy.  She was so great in the role that generations of people have been won over to the tremendous talent that was Judy Garland solely on the strength of that singular performance.  Hundreds of singers have covered “Over the Rainbow” but none have achieved the impact and reach of Judy’s interpretation.  That song is forever hers. But Judy was much more than that song or that movie.

Building upon The Wizard’s huge success, Judy was kept busy with making a series of MGM musicals throughout the 1940’s.  Two of her most successful films were Meet Me in St. Louis and Ziegfeld Follies.  Of these two, Meet Me in St. Louis was the one that had Judy truly transitioning from a younger studio phenom to a full-fledged adult star able to carry a film and bring in the box office numbers.  Meet Me in St. Louis produced some of Judy’s most beloved musical hits – “The Trolley Song,” “The Boy Next Door,” and “Have Yourself a Merry Little Christmas.”  Director and future husband, Vincent Minnelli was instrumental in crafting Judy’s look and performance in the film.  The picture is a wonderful tribute to Hollywood’s vision of a time gone by.  Judy’s voice was never better and her new look was full of wide-eyed vitality with just the right amount of worldliness.  Minnelli required the best from Judy and the results are a stunning performance from an actress almost unrecognizable from the naïve farm girl she portrayed in Wizard of Oz just a few years before. This film is my favorite among the MGM musicals with Judy in the cast.

Towards the end of the 1940’s the frantic pace of production, a series of short failed marriages, and Judy’s growing drug dependence took their heavy toll.  She was hospitalized several times for exhaustion and suffered a nervous breakdown.  Eventually, roles dried up and her contract with MGM was canceled. Going into the 1950’s, Judy drifted in and out of the public eye, occasionally appearing on TV variety shows.  She managed to re-invent herself as a stage singer which revived her career to the point where she was appearing on stages around the world to sold out crowds.  After a particularly successful run in Great Britain, Judy returned to Hollywood with her then husband, Sidney Luft to independently bankroll and produce a pet project – a musical re-make of A Star is Born, a Hollywood backstage story that closely mirrored Judy’s life at that time.

I love this film more for the drama between Judy and James Mason than any of the musical elements (except for the wonderfully overwrought version of “The Man That Got Away” that Judy sings with gusto and loads of bawdy vibrato).  Judy’s honest, harrowing performance is the one time on film that we get close to anything that might be like the real Judy Garland. The film was a great critical success and audiences loved it.  There was even another Oscar nomination.  However, none of this positive press resulted in a big box office and the film ended up losing money.  Roles never materialized, the money disappeared and another of Judy’s marriages imploded.  Judy appeared in a few more small films but eventually returned to television appearances and the concert stage.

After a near death, Hepatitis scare at the end of the 1950’s, Judy bounced back once again with a one-off concert at Carnegie Hall in 1963 that was the musical sensation of the year.  The recording from the show went on to chart 13 weeks at number one on Billboard and garnered 4 Grammy awards including Album of the Year and Female Vocal of the Year.

Following the success of the Carnegie Hall concert, Judy re-made herself again by tapping into her vaudeville roots and taking to the stage singing in elaborate stage shows around the world.  She never returned to Hollywood and only appeared on television sporadically.  By late 1969, the years of relying upon medication to fuel her days caught up to her and in the words of her Wizard of Oz co-star, Ray Bolger (The Scarecrow) “She just plain wore out.”  Judy Garland passed away at the age of 47.

Judy Garland was one of the most unique, beloved and tragic stars from the Golden Age of Hollywood.  Her journey from child star to musical sensation to tragic early demise is a complete American Hollywood tale that is no scripted fantasy, but the real legacy left by one of the most massively talented entertainers the industry has ever seen.

Read our press release and visit the Knickerbocker Film Page.