Here are three things that go through the minds of many college students when they’re asked to write a paper for a course:

One: “I’m not going to spend too much time on this paper, because that’s not going to help me get a good job when I graduate.” 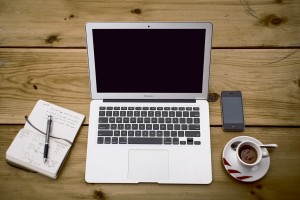 Two: “Writing is important in English classes and in some of my gen-ed classes. But it’s not that important for my major, since I’m majoring in chemistry (or accounting or athletic training or the performing arts).”

Three: “Today, the world runs on web visuals, texting, e-mailing, and social media. When my professors assign formal papers and essays—well, that just seems so out of date.”

I’d wager that almost every college student has had at least one of these thoughts, at least once. Allowing such notions to pass through one’s mind is not an abnormal condition; these are not signs of immaturity or laziness. These three thoughts do share one small problem, however: they’re all false.

False thought 1: “Being a good writer isn’t going to help me in the job market.”

All the available evidence suggests that good writing is a key factor for success in the world of work. A recent article in Time Magazine points to a number of studies and additional evidence, suggesting that hiring and promotion are often dependent on the candidate’s writing skills. It quotes Grammarly CEO Brad Hoover, who wrote in a recent Harvard Business Review blog that “If you are a native English-speaker and never learned the difference between ‘it’s’ and ‘its,’ especially given access to Google, an employer might wonder: What else have you failed to learn that might be useful?” Hoover’s article makes reference to Kyle Wiens, CEO of iFixit, who wrote in a blog post that he refuses to hire people who use poor grammar. He believes that “good grammar is a sign of professional credibility, attention to detail, and learning ability.” That post earned kudos from a Forbes Magazine contributor, who found this point particularly compelling:

In blog posts, on Facebook statuses, in e-mails, and on company websites, your words are all you have,” [Wiens] writes. “They are a projection of you in your physical absence.  And, for better or worse, people judge you if you can’t tell the difference between their, there and they’re.”

Another article on the Harvard site points out that in the world of business, evaluations of a person’s credibility depend significantly on that person’s writing ability. The author notes that “people jump to all kinds of conclusions about you when they read documents you have written. They decide, for instance, how smart, how creative, how well organized, how trustworthy, and how considerate you are.”

If you’re majoring in the sciences in order to avoid writing, you’ve made a pretty serious mistake—and you’ll know it as soon as you get back your first lab report. And almost every academic major—no matter how “hands-on” or “practical”—requires a substantial amount of writing. College is different from a trade school; there, you might be tested only on your technical know-how, but in college, you also need to be able to describe, explain, think about, and communicate about your technical abilities. These kinds of abilities, which are bolstered by good writing habits, help to explain why college graduates tend to have better jobs and more job choices over the long run.

The natural sciences provide a good example. Science depends on the ability of other people to understand, and when necessary to duplicate, the work of other scientists. Moreover, given the tremendous amount of scientific work being done (and written about), no one has time to read bad explanations; they will just skip over such work and go on to one of the other thousand or so accounts of the same kind of work, all of which are easily accessible via the internet.

All of these factors mean that, in order to get people to pay attention to your work (regardless of your field), you need to be able to express yourself with clarity and grace. An excellent article in Psychology Today demonstrates why good writing matters, even in science; it cites a number of passages of scientific writing, both good and bad, to show how much difference it makes.

As for business majors: item number 1, above, explains why businesspeople need to be able to write well—as does this next item:

False thought 3: “Today’s world runs on web visuals, texting, and e-mailing, so when my professors demand good writing, they’re just out of date.”

A professor at the University of Colorado noticed that her students’ attention to the web and to electronic communication had not only diminished their writing skills; it had also reduced their level of care about their writing and their level of interest in learning to write well. She found herself wondering how employers felt about hiring people who didn’t write well, or who didn’t care about how they wrote. So she penned a column in The Denver Post in which she came right out and asked employers whether this was true.

She received a great many direct responses that convinced her how much writing matters, right across the spectrum of jobs and fields. The responses aren’t on the newspaper’s comments page, but they are well described in an interview on Colorado Public Radio. The professor talks about the shift away from good writing over the last several decades, and then discusses the range of responses that she got from her column in the Post.

Employers not only told her that writing matters, but that they use a person’s writing in order to winnow down their large pools of applicants. She refers to letters that she received from mortgage companies, heavy equipment manufacturers, auditors, veterinarians, engineers, and many others. Only one letter said that technical skill was more important than writing ability in the hiring process—but even that letter indicated that, “if that person wants to rise in our company, and stay in our company, then writing will matter.”

How to think differently

Most universities and colleges have a wide range of resources that can help students become better writers. At Hope College, we continue to weave writing into all aspects of the educational experience—not only in general education classes, but in the majors as well. The Klooster Center for Excellence in Writing provides peer assistance to all students, of all ages, in all majors, and through all stages of the writing process. If you’re a Hope student, you’ll want to visit the Center early and often!