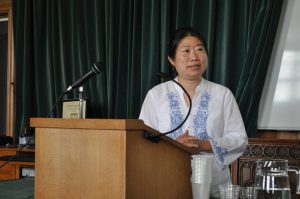 “Are you on vacation now?” my friendly neighbors often ask during the summer months. True, the academic year ends when I send in the final grades for my classes in May. Then I enter my gardening phase, which is late spring and early summer, when I’m hopeful for the new growing season and before the Midwestern sun demonstrates its full force. Yet, the reading and writing that are integral to the academic life does not cease. In fact, once final grades are in I turn my attention to the writing of conference papers for presentation at two annual conferences usually held at the end of June or the beginning of July.

The Yale-Edinburgh Group on the History of the Missionary Movement and World Christianity holds its yearly meetings at the University of Edinburgh and Yale University, with the two universities alternating as hosts every year. The Andrew F. Walls Centre for the Study of Asian and African Christianity also hosts an annual conference, which takes place at Liverpool Hope University in Liverpool. This has been my yearly ritual for the past eight years or so: almost two months of frantic reading and writing, followed by attendance and presentations at these conferences, and then more (albeit less frantic) reading and writing back in Holland as I continue working on a manuscript on Christianity in twentieth-century China, an ongoing project of mine for a good number of years now. This is the life of a history professor in a nutshell: one never graduates!

I like to write in the quiet of my study at home. My desk is in front of a window that looks out to a big maple tree and my vegetable garden in the backyard, and my computer is in front of another window, which looks out to the street. Sometimes I see neighbors walking their dogs; sometimes I see the mailman making his round. The writing isn’t all that glamorous, but it’s the substance of the profession. The traveling to conferences, especially those on the other side of the Atlantic, on the other hand, is always a highlight of my summers. Presenting one’s work to other scholars—some from both sides of the Atlantic, and others from as far afield as Asia, Africa, and Australia—and learning from them provide a necessary stimulus to my own work. “Iron sharpens iron” (Proverbs 27:17). 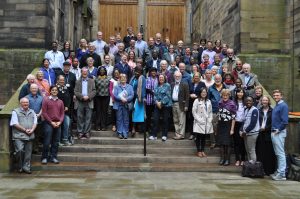 This year, however, was special. I did something I had never done before, almost extravagant. The Yale-Edinburgh meeting was to take place in Edinburgh this summer, and my cousin Jon, a newly minted MD, wanted to tag along. We decided to rent a cottage on the Isle of Skye, an island of some 600 square miles in northwest Scotland, for eight days. I persuaded a British friend to take us in a rented car. We experienced the full range of Scottish weather—rain, mist, wind, and two whole days of sunshine. The setting was fit for Wagner’s operas. We hiked up muddy and stony mountain trails where sheep wandered at will. We chatted with an old shepherd whose affection for his beasts was evident. The memory of this shepherd remained vivid in my mind for a long time, for he brought to my mind the One who called himself the Good Shepherd—

The Good Shepherd of Skye

Windswept, silver-grey hair,
Wrinkled, weather-beaten,
A ready smile, rough hands,
Accustomed to labor,
Tattered at the elbows–
“I am the Good Shepherd.”

A life of wanderings,
Tales waiting to be heard–
T’was to men such as he,
The angles first announced,
“Glory to God above,
And peace to man on earth.”

Lord, grant me eyes to see,
Thee in this humble man,
My Redeemer and Friend. 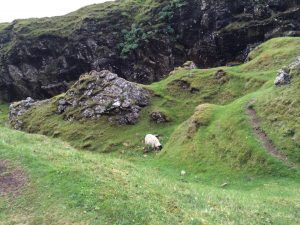 This summer I brought back with me the memory of my unexpected encounter with the Gospel message on the Isle of Skye. I was humbled and moved as never before by the mystery of the Incarnation. 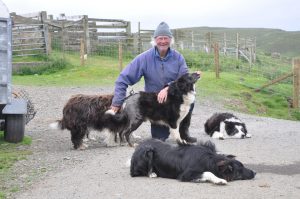