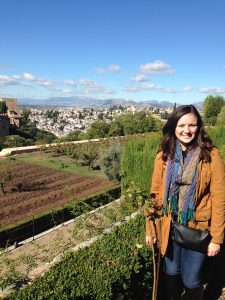 Basically, since I started taking Spanish in seventh grade, I decided that I had to study abroad at some point while I was in college. I love learning about new cultures and groups of people and I wanted to experience a new culture firsthand. This fascination led me wanting to major in History and Spanish by the time I graduated high school. By this time I had also decided on being a lawyer, mostly because my high school history teacher had been a lawyer before he became a teacher and the way he described it made it seem like a good career for me. Eventually, I added on Political Science as a third major because I took a lower-level Political Science course my freshman year of college and I loved it. However, I wouldn’t say I had an extremely clear grasp on what actually being a lawyer was like; I just knew that studying History and Political Science and going to law school was a good combination and that knowing Spanish is a plus in any career. Now that I am almost done with my study abroad experience, I think I now understand why I chose this path and why it is perfect for me and studying abroad has shaped me towards being a lawyer and understanding more about the field.

I decided to go to Madrid, Spain the fall of my junior year of college, so the fall of 2016. I chose Spain because I think Spain has so much cultural and historical richness and I had learned about the history of Spain very thoroughly in my Spanish classes in high school so I wanted to see all of the places I had learned about. Therefore, while I was researching study abroad programs in Spain, I came across a program by the program CIEE called Legal Studies in Madrid, Spain. This immediately drew my attention because I wanted to take something related to law during my study abroad experience and learn about law in a different country, which would in turn help me learn about law in my own country through comparison. So I chose that program and at the end of the summer took off for Spain.

This program included taking one class taught by the program, Law in Contemporary Spain, and then for the rest of my courses, I am directly enrolled in classes in the Universidad Carlos III of Madrid. Law in Contemporary Spain was extremely interesting because through learning about the process of law in Spain and different social issues and solutions in Spain, I ended up learning more about my society in the United States. For example, we went to a courthouse in Leganés, a city outside of Madrid, and went to the courthouse there and walked through the different procedures that occur there, from lineups for identification by witnesses to trials to weddings. It was interesting to learn about court proceedings in Spain and compare them to the United States. During another class, we talked about the prison system in Spain and how it works to rehabilitate prisoners and prevent recidivism, and this led to a discussion comparing the prison systems of the United States and Spain. This class led me to have a different perspective on law in my own country by thinking about law in Spain and it made me more in interested in studying law.

Also, one of my classes that I took directly enrolled in the university was a law class on the theory of law. In Spain, after students graduate from high school, they immediately start their law studies, instead of going to undergraduate school and then going to law school like in the United States. So this class was like taking a first-year class in law school in the United States. By taking this course, I realize that my writing and analytical skills obtained from my studies so far have made me ready for law school and my majors connect very well to the study of law.  History, political science, and law go well together in that they all force people to analyze material and take into account different perspectives from different parties to form a well-rounded viewpoint or idea. It has been very interesting to study law in another country and through this experience, not only have I learned more about Spain, but I have learned more about my own country and myself.