December can be dark and dreary in Michigan and other northern places, a season of cold and clouds and final exams. The holidays we celebrate during this time bring warmth and light we often badly need. But if we’re weary or chilled, in body or soul, how do we get in the spirit?

When I was a child, if I wanted a dollop of condensed Christmas cheer, I’d often crack open a large hardback volume, bound in red fabric, that my mother gave to me. I forget its exact name, but something like A Christmas Treasury. This book collected scraps from longer texts and stand-alone pieces. They were old and new; funny and sad; earnest and cynical; poetry, lyric, and prose. They shared only one element: Christmas. 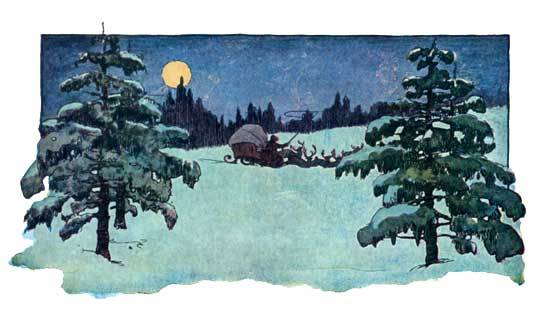 Sometimes I paged through this volume in search of the familiar, and found Christmas gift-giving chapters from children’s books my parents had read to me, like Anne of Green Gables and The Five Little Peppers and How They Grew.

Other times, I hunted out hidden gems, like the Henry Wadsworth Longfellow poem “Christmas Bells,” from which the lyrics of the holiday tune “I Heard the Bells on Christmas Day” are excerpted. Written on Christmas in 1863, while Longfellow’s own son was fighting in the Civil War, the poet wrestles with deep grief and ringing trust in the familiar angels’ phrase: “peace on Earth, good will to men.”

Not everything that warms my heart at this season is found in that old red tome, though. Nothing, for instance, could be warmer or more wonderful than the chapter “Dulce Domum” from Kenneth Grahame’s The Wind in the Willows, when the Mole, who has been living an exciting life abroad, finds himself by his own snug burrow again just in time to welcome caroling field mice. Good food, hot drinks, and song: how is it that even reading about these lifts the spirits so?

“Surely I’m not alone,” I thought, “in turning to literature again and again as this time of year comes around?” So I reached out to colleagues in the English department, and of course, many had favorites to share. Here is our own Treasury for you:

♦        “Around Christmas,” says Dr. Peter Schakel, “I often think of two essays by C. S. Lewis: ‘Xmas and Christmas: A Lost Chapter from Herodotus’ and ‘What Christmas Means to Me.’ Both are in the Lewis collection God in the Dock, as well as other places. They’re his indirect, irreverent, and funny response to the commercialization of Christmas.”

♦        Dr. Regan Postma-Montaño shares: “When I was a child, I loved reading The Christmas Dolls by Carol Beach York. It is about Tatty, an orphan girl who fixes up the disregarded dolls that no one wants. It’s still a favorite!”

♦        “One Christmas poem I love,” Dr. Curtis Gruenler says, “is ‘In the Bleak Midwinter’ by Christina Rossetti, especially as set to music by Gustav Holst and sung by Julie Andrews.” Hot tip: it’s available on Spotify…

♦        Dr. Rhoda Burton confesses: “all the works that are supposed to give us a good Christmassy feeling don’t, except maybe A Christmas Carol. The only one I get a proper Christmas feeling from is On the Banks of Plum Creek by Laura Ingalls Wilder—remember the Christmas church scene in which Laura receives the snuggly fur muff?”

♦        For Dr. Mike Owens, nothing can beat the opening lines of the Gospel of John, starting with: In the beginning was the Word, and the Word was with God, and the Word was God. Says Dr. Owens: “In very beautiful, striking, stunning language, it captures the Incarnation story, and gives the reader a profound theology.”

♦        Dr. Kathleen Verduin shares that “John Updike’s 1963 novel The Centaur is a tribute to his father, an impoverished, self-mocking, rather zany, but magnificently charitable man recast as the character George Caldwell. In one chapter, Caldwell and his adolescent son pick up a hitch-hiker, a garrulous drunk who batters them with stories of his resentments. After they drop him off, they discover that Caldwell’s new gloves, a Christmas gift, are gone. ‘It’s all right, Peter,’ Caldwell tells his son. ‘He needs them more than I do.’”

♦        A special text for Dr. Ernest Cole is Aminatta Forna’s novel Happiness. It’s “not exactly in the buoyant spirit of Christmas, but its message of redemption and transcendence connects to the Nativity. Forna uses the metaphor of forest fire to signal hope for amputees of the civil war and for post-war Sierra Leone to reclaim a meaningful existence. In spite of its devastation after a fire, a forest has the capacity to grow again.”

♦        Dr. Susanna Childress recommends the anthology Light Upon Light: A Literary Guide to Prayer for Advent, Christmas, and Epiphany, especially four poems: “Nativity” by Li-Young Lee, “Advent” by Enuma Okoro, “The Adoration of the Infant Jesus” by Benjamin Alire Sáenz, and “Incarnation” by Amit Majmudar. Regarding the last, she notes: “I admire the word-play and syntatic and aural fireworks here; this poem is a joy to read out loud but also makes me think, reflect, and wonder.”

♦        And Dr. Stephen Hemenway has this literary memory to share: “About 15 years ago, when my dad was 90, the two of us read aloud the entire Christmas Carol by Charles Dickens to the residents of his assisted living facility.  This was done in one multi-hour sitting with frequent coffee/cookie breaks and bathroom breaks for the listeners.”

Perhaps next December, we can convince Doc Hemenway to reprise this reading with the Hope community. For now, we wish you safe travels, good reading, and good cheer!

Do you have favorite seasonal poems or stories? Pass them on, please…