Think back to when you were a kid – do you remember what you wanted to be when you grew up?  A firefighter, a professional athlete, a nurse, or perhaps a teacher?  Michael Kiley’s dream was to be an inventor, following in the footsteps of Thomas Edison or Alexander Graham Bell. Or like many young boys who admire their father, perhaps he would pursue becoming a medical doctor so that like his dad, he could use his work as a way to help other people.

Even though he didn’t have any computer-related experience coming into college, Michael chose to major in Computer Science since he saw that field as the home of present-day inventors, working to bring the latest technology to life.  Since he has always really enjoyed learning new things, he hoped that studying Computer Science would provide the atmosphere of exciting innovation that he was looking for.  That hope was fulfilled in numerous ways during his time studying Computer Science, both inside and outside of the classroom.

The most appealing part of computer science to me is that it allows you to create – create new software, create new solutions to complex and exciting problems, create new ways of interacting with others and with the world around you. And, once you have created something new, it is amazingly easy to distribute that creation to a huge audience. It is also very exciting due to the almost constant improvements and innovations that are being made within the field.

I wish people knew how much fun it is! If you like applying your creativity to solve new and exciting problems, CS is for you!

Michael spent two summers working on summer research projects and recalls those as being the best part of his student experience.  During these summers, his goal-orientation and persistence helped him grow his development skills and gain valuable experience that was very useful in subsequent internships and his search for a full time job.  The courses he took outside Computer Science as part of his liberal arts education also proved valuable, helping him develop the ability to think critically and learn effectively in areas beyond his technical focus.  For example, this past summer he interned at a company that creates software for several local court and jail systems in Michigan, and had to learn all sorts of things about the inner workings of these local governments in order to write the software. 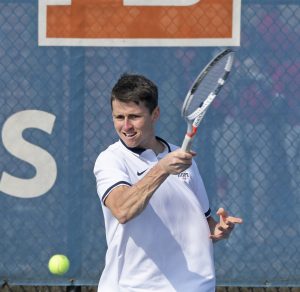 In addition to his excellence in the classroom, Michael also excelled as a student-athlete.  He played varsity tennis throughout his time at Hope and was named a team captain in his senior year.  He was named to the all-MIAA team in each of his four years, twice as a first-team honoree and twice as a member of the second team. Recently he was named the 2019 recipient of the Michigan Intercollegiate Athletic Association’s Dr. Allen B. Stowe Memorial sportsmanship award.

Michael will begin full time employment after graduation as a member of the Connected Products team at Open Systems Technologies in Grand Rapids. His  dream for his career is to start his own business. While he doesn’t know exactly what that will look like, he does know that in 10 years he would like to be using his CS skills to work for himself in some form, whether it be on some product he comes up with or in consulting.   The faculty of the Computer Science department are confident he will be successful in whatever he pursues!