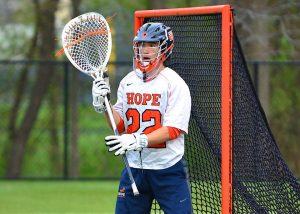 I play lacrosse for Hope, and it’s my absolute joy to wear the orange-and-blue jersey. I also play for another team, and it gives me great pride and pleasure, too. I play team handball for Team USA, and I recently got the opportunity to do so in Croatia. Although my trip was not part of my official curriculum as a history and economics double major, it was an unique educational experience and could not have happened without the support of the Hope College community.

I grew up playing lacrosse in the Detroit area but in the summer of 2012, I came upon team handball while watching the London Olympics.  I really liked how fast paced the sport was, and it seemed like something that would help keep me in shape for lacrosse.  I did a little bit of research and discovered that the only handball club near me was located all the way in Chicago. Luckily, my family took a vacation to Chicago later that summer, and I found a way to practice with the club. That was my first time playing the sport, and I was hooked! I later formed a de facto club at my high school, Detroit Catholic Central, and continued to play casually with my friends.

In the fall of 2014 I heard about an open tryout for the US U21 national handball team in Chicago, naturally I signed up to attend. After a few fun but grueling days, I was put on the reserve team, which is a fancy way of saying I didn’t make the cut. A few months later though, the coach of that team emailed me asking if I’d be willing to play in a tournament in Sweden. Since then, I’ve practiced with that original team in Chicago every few months, and have practiced with another team in Chicago (which is coached by the U21 national team) about once a month, in addition to training with the Olympic team a couple of times.

In fact, for most of my coaches and fellow campers, I was the first American handball player they had ever seen.

This summer, an opportunity to play in Croatia came about and there was no way I could turn it down. I attended the International Handball Goalkeeper Camp, an annual weeklong training camp in the coastal resort town of Omis. The camp’s reputation has attracted some of the best handball goalkeepers and coaches in the world. To draw a comparison with football, it would be like attending a quarterback camp with Tom Brady, Peyton Manning, and Matthew Stafford in the Bahamas. I was lucky enough to have been accepted to the camp last summer, which made me the first American ever attended. In fact, for most of my coaches and fellow campers, I was the first American handball player they had ever seen.

Over 90 goalkeepers attended the camp, and about 26 countries were represented. There were two training sessions a day, one in the morning and one in the evening. Each session was led by a coach and player, and would emphasize a different aspect of goalkeeping. Not only were the coaches and players world class, they were also very down to earth and willing to help. Borko Ristovski, the goalkeeper for Macedonia’s national team and Barcelona, would stay after every session and shoot penalty shots with younger goalies. Roland Mikler, the national team goalkeeper for Hungary and one of my favorite pro goalies, was at nearly every training session and gave specific feedback to the athletes. My training partner one day might be a professional goalkeeper from Egypt or a nearly 7 foot tall athlete from Finland.

Hearing these different viewpoints gave me a more nuanced understanding of how the U.S. is perceived by different people and gave me the chance to represent the United States to these people in a personal way.

I may not have many things in common with someone from Denmark or Croatia, but on the handball court, we were able to start a dialogue that carries into mealtime and rest time (luckily, almost everyone spoke fluent English). Most of the conversations would take place in the hotel’s pizza shop. I was amazed at how naturally a conversation about handball could transition into a profound dialogue about topics like the refugee crisis. Perspectives from Sweden, Spain, Germany, Denmark, Egypt, the Netherlands, and the United States would each be presented in these conversations, which were always civil and sometimes light-hearted. Hearing these different viewpoints gave me a more nuanced understanding of how the U.S. is perceived by different people and gave me the chance to represent the United States to these people in a personal way. While the technical aspects of the International Handball Goalkeeper Camp were immeasurably valuable, the opportunity to make friends from all over the world is what I cherish  about time in Croatia.

Hope College has provided me with both the support and education that allows me to get the most out of my experiences playing handball abroad. In the athletic department, I have found tremendous support as both a varsity lacrosse player and an aspiring handball player. Hope’s Head Lacrosse Coach Michael Schanhals has been particularly supportive of me both as an athlete and person. At great cost to the lacrosse team, he allowed me to travel to Paraguay during spring break (when our lacrosse team was in-season) so that I could compete for Team USA in the Pan-American Championships. He has also been one of my biggest advocates and biggest role models.

Other coaches, like Becky Schmidt, Chad Carlson, and Melinda Larson, have been incredible mentors and have helped anchor me as both an athlete and a Christian. Academically, I have been blessed with very patient and helpful advisors in both the History and Economics Departments. Professors Marc Baer and Gloria Tseng have helped me improve as a historian and have fostered my love of history and writing. Professors Todd Steen and Stacy Jackson of the Economics Department have also been extremely accommodating and supportive of me, which I have always appreciated considering that I’m not the most talented economics student in the department. However, with their help, I have been able to refine my knowledge of economics so that I can view the world through an added lense.  Finally, I’ve had a tremendous amount of support from my fellow members of the Fraternal Society.