A team is a family. The phrase has been used so often in the sports world lexicon that it’s prone to sounding trite or cliché. A team is a family. Is it predictable? Maybe. Overused? Possibly. But clichés are also this: they are true. 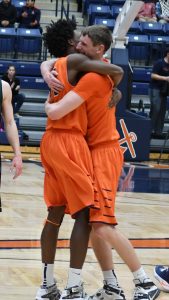 Late in a game during his freshmen year at Hope, Towns was flying. A gravity-defying leap for a rebou 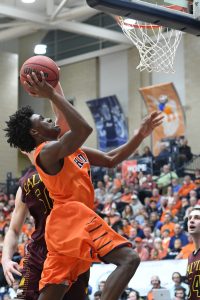 nd — a Towns’ trademark lifted high a hundred times before in DeVos Fieldhouse — looked so superhuman that his hang-time bordered on the surreal. Well, at least it did until he landed. Reality hit when Towns came down to earth.

Here, let him tell you.

“There was about 30 seconds left in the game and we were on defense and the other team missed about five layups in a row.  So, I kept jumping for the rebound and eventually on the last one, my foot was kind of turned inward a little bit.  So, when I came down, the outside of my foot landed on top of someone else’s foot. And I was coming down from a high jump, too.  Anyway, my ankle rolled almost completely over and dislocated and slid right out of place.  I didn’t feel anything break, but when I sat down and looked at my foot, it was like, ‘oh, my goodness.’  I had never been injured previously up until that point. Like never!  I had never missed a game in high school or college.  Just seeing that was mind blowing.”

The “that” that Towns saw — as well as most in attendance in DeVos — was a foot pointing in a direction that no human foot is meant to point. It was turned out in an almost perpendicular manner to the side of his leg, a wrong-way right angle.

“The support that everyone in the building showed my mom that night was very touching, and I knew that it was very genuine.”

Towns grabbed at his ankle in panic and pain. Gasps went up and then silence came over the crowd. Hope’s athletic trainers sprang into action while the faces of teammates and coaches expressed immediate concern. And in the stands, Towns’ mother, Carol, was distraught. 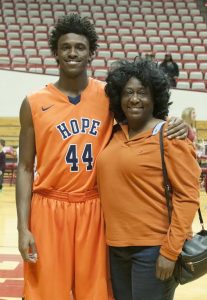 “When she saw that, she was just very flustered. The support that everyone in the building showed my mom that night was very touching, and I knew that it was very genuine,” says Towns, a native of Flint, Michigan, and graduate of Flint Powers Catholic. “That’s one thing I am very grateful to the Hope community for because my mom was hysterical. She had never seen me hurt before.   Everyone was offering to help — the athletic trainers, basketball parents and even spectators. And of course, Coach was there for me and her too.”

After x-rays confirmed no break but a severe dislocation and after Carol Towns realized her son would be well cared for and play again at Hope, Dennis Towns went about the arduous work of rehab, hours of physical pushing and, of course, patience. And the support for the Townses kept rolling in. A get-well card was sent to Dennis from Hope basketball fans in attendance at a H-Club luncheon; athletic trainer Tim Koberna and jayvee coach Chad Carlson attended his first doctor’s appointment along with Carol; and, text and email messages of concern and well wishes dinged notifications of concern and encouragement to both of their phones.

“I mean, people I didn’t even know from Hope were checking in and asking me how things were going for Dennis,” offers Carol. “The support we received from the whole Hope community was phenomenal.”

By his sophomore year, Towns was ready to play again; his ankle healed, he became an integral cog off the bench during Hope’s 2016-17 MIAA championship season. This year, the computer science major, who also dabbles in piano and speaks Japanese, is projected to be a starting forward. 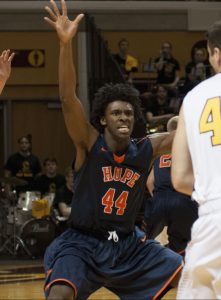 “Dennis can shoot that mid-range baseline jumper, which is kind of a no man’s land shot, but he loves it,” says Mitchell, now in his fourth year as Hope’s head coach. “Every day with Dennis seems like this explosion of potential and just a kind of joy for the game. He has an energy that reverberates.”

“I feel I can always go to him for anything. I think that will remain even after I graduate.”

Those are words Towns appreciates though they’re not totally new to his ears. Mitchell has not only been a coach but a mentor to Towns, a voice of encouragement and direction.

“Coach has been confident in me from the beginning,” Towns says.  “That’s one thing I can definitely say about our relationship.  I’ve always felt like he believed in me as a player and a person.  I’m glad that is a quality that he has because last year, being a sophomore on varsity with all the upperclassmen, it was like you can fall into a funk, wondering if you’re going to play.  But, Coach always was there to encourage me to work hard.  When I’m on the court, I’ve always been someone to give it all I have.  He sees that and encourages that. I feel I can always go to him for anything. I think that will remain even after I graduate.”

“That’s who we all are at Hope. Maybe a lot of folks don’t realize that from the tri-fold brochure, but I think once they are here, they quickly see that Hope is a place that cares deeply about players and students.”

A team is a family. And not just for one season but beyond. For Mitchell, coaching basketball is as much about loving people as loving the game… and in that order. 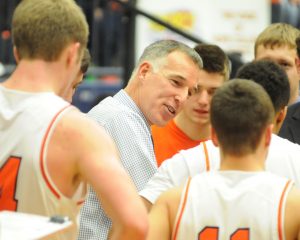 “I’m not looking for a pat on the back. I just think that’s the best part of coaching,” Mitchell explains. “It isn’t practice; it’s the relationships. It’s seeing Dennis’ mom getting emotional about the love she received that night (of his injury) and how everybody just kind of helped her decompress and assured her that everything was going to be okay. As she’s walking from the arena to the training room and then heading to the hospital, it was really hard for her. And so I think the support of Hope and our coaching staff and our team was reassuring.”

“But that’s what Hope is,” he continues. “That’s who we all are at Hope. Maybe a lot of folks don’t realize that from the tri-fold brochure, but I think once they are here, they quickly see that Hope is a place that cares deeply about players and students…. I would much rather get invited to a player’s wedding than have him score 20 points. Lifelong relationships are what this is all about.”

Then Mitchell pauses and smiles and adds,

“But if I’m being completely honest, the 20 points is good too.”