Standing at the edge of a collegiate diving board during a meet— back to the water, ready to leap into contortions of twists and flips and pikes, it can be a lonely place for a diver. The natatorium is silent except for the annoying slurping of gutter water. A low hum of light whispers to full-on silence falls over the crowd; all eyes, few voices. And the spotlight can be harsh, focused as it is on one place. There — several feet above the pool’s water with more height to be added once the jump occurs — the diver stands alone with diver thoughts.

But not for long.

The jump, the dive, the splash, the submersion, and then swim to the side of the pool — it all covers about 15 seconds. The loud cheering and subsequent greeting from fellow diving teammates and coaches back on deck. . . that gleeful reunion takes much longer. And that is exactly why being a Hope College diver is not a lone endeavor, after all. Every one of Hope’s five divers say that they are not really a singular entity and, surprisingly, they say they are not a team either. Instead they say, separately and unprompted, that they are family.

“This family is the best thing that Hope has given to me,” says senior Areal Tolsma. “When I joined the team four years ago, I didn’t realize I was joining a family,” declares senior Sara Plohetski. “I just love this family, and I know they love me, too,” says freshman Kamaron Wilcox. “The second I stepped on the pool deck, I was welcomed with open arms,” affirms sophomore Grant Williams. “(Diving coach) Becca (Garza) really supports us and our growth as a family,” reiterates senior Brian Simonich.

See what I mean.

At last weekend’s MIAA Championships, three of the five members of the Hope diving family qualified for the NCAA Division III Central Region Meet, held this weekend at Wabash College in Crawfordsville, Indiana. On Friday and Saturday, Plohetski, Simonich and Williams will be competing for a spot at the national championships later this month. And Tolsma and Wilcox will be there, too — cheering in the stands. Because that’s what families do.

For Garza, that team unity is born out of each diver’s hard work and Christian character. From late September to late February (and not including out-of-season training), the divers give three hours a day to diving practice (and that includes weight-room work), plus more when it comes to their mental preparation. They also pray together at the end of each practice and before every meet.

“They push each other to be better athletes, better students and better Christians,” says Garza, who also teaches Spanish immersion for Zeeland Public Schools. “The environment they’ve created plays a large role in how successful their training has been. They challenge each other, support each other and have fun together. Our training is centered around God and the abilities He has given us to do what we love. . .That combined with mental training has made all of them stronger athletes.”

To get to regionals, Plohetski, Simonich and Williams all qualified with B-cut point totals on both the 1- and 3-meter boards. Each became all-MIAA honorees, too. Williams won the MIAA title on the 3-meter and was runner-up on the 1-meter; Simonich and Plohetski took third place on each board.

The added bonus of continuing their season now with regional competition is something that none of the three takes for granted while it was also something they determinedly prepared for since day one.  Simonich knows the competition at regionals; he’s seen it twice before, and it won’t be easy.  “It is going to be pretty hard to get out of our region to nationals,” explains the senior. “But since this is potentially my last meet, I’m just going to go out there and have fun and compete and be present.”

“My hope for our three divers this weekend is that they leave the pool deck Saturday night knowing they gave it all they had,” Garza says. “For my two seniors, I want them to feel like this weekend showcases their training, abilities and hard work — no matter the results. This is a fun meet and a great time to spend together. Though punching a ticket to nationals would be a great addition.” 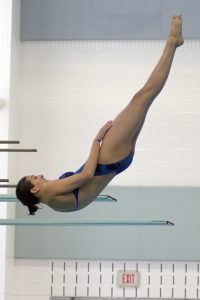 Plohetski has the same mindset as Garza and Simonich for this weekend but really, it has been that way for her entire career at Hope. As a Division III student-athlete, all she has ever wanted to do was work hard at something she loves, no scholarships or strings attached.

“This weekend, I just want to leave it all on the boards,” the senior says. “A week ago, I didn’t even know if I would have the opportunity to compete this weekend, so having this chance is just a gift. I want to dive my dives and just glorify God through my actions and attitude through the whole weekend. I also just want to soak up every moment with my diving family.”

There it is again. That family feeling.