Over the course of two days this week, Hope College will host eight (maybe nine) softball and baseball games at Wolters and Boeve Stadiums. It makes for a lot of excitement for Hope players and fans, but it also makes a lot of work for the Hope grounds crew, those behind-the-scenes diamond denizens who maintain, prepare, and redo infields and outfields over and over to make them just right for all who play. 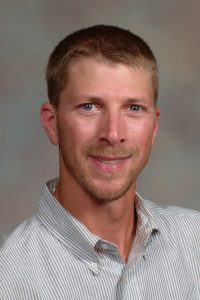 But they aren’t complaining. In fact, groundskeeper Jim Speelman and his crew get a kick out of creating well-maintained and meticulously-groomed fields of green.

While most of us simply show up at ball diamonds expecting the grass and dirt and white lines to look just so, rarely stopping to think about how they get that way, Speelman does stop and think about it. Everyday. Especially this Thursday and Friday when Hope hosts the two-day MIAA Softball Tournament and the final baseball doubleheader.

The Flying Dutch softball team opens tournament play against Trine University on Thursday at 1:00 pm while the Flying Dutchmen baseball team will close their home season at 2:00 pm versus Adrian College on Friday.

A 20-year veteran of the Hope grounds department who owned a lawn care business prior to arriving on campus, Speelman, who is now the president of the President of Michigan Sports Turf Manager Association (MSTMA), admits he never maintained or marked a ball field before coming to Hope. Last week, though, he conducted his third clinic for MSTHA’s members on infield maintenance. It gives him an opportunity to share his field wisdom as well as give back to the organization that taught him so much. It’s also a chance to showcase Hope’s two first-rate ball fields.

At the clinic, Speelman discussed “brooming,” “dragging,” repairing, and irrigating. He talked about repair for profound wear around all bases and the pitcher’s mound. He enlightened on dirt texture and workability.

And the man who knows each field’s topography like the proverbial back of his hand — Where the field dips a bit and hold more water? Where fielders trample down grass and dirt and leave pesky ruts? Where the drain lines are exactly? — imparted his philosophy on field upkeep and presentation recently, too. 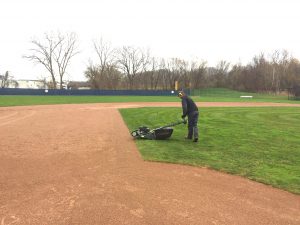 “We want to give Hope players that ‘wow’ factor’ every time they come to the field,” says Speelman who is joined by Josh Alleman and his father Bob Speelman working on Hope’s athletic fields. “There is something about setting a field up and getting it to look nice, even if it’s going to be destroyed in two hours… if that. I like to watch the players come out and see that they are the ones putting the first footprints on the field because everything has just been dragged and swept. I like hearing them say, ‘Wow, this place looks sweet.’” 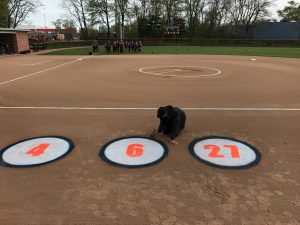 As added touches, Speelman makes handmade stencils so he can paint Hope logos or uniform numbers for Senior Recognition Days on the field.  Additionally, he and his crew only have 20 minutes between doubleheader or tournament games to repack the pitcher’s foot plant area on the mound, fill in base paths or home plate holes, re-chalk batter-box lines, and re-drag the infield, but they want “the second game to start out as close to the same field conditions as when the first game started,” he says.

Though unruly, complicated, non-spring-like weather adds layers to their work wardrobe and extra time to their workday, the grounds crew is still happy to provide a service they know makes a difference. They’ll gladly start their diamond day well before to the first pitch and remain well into the last game. Besides, it would be hard imagining any one of these guys sitting behind an indoor desk. The outdoors is where they feel called to be.

“We want to create an experience, and we’re doing it for a good purpose,” explains Alleman. “It’s like any job in life. You have a gratitude of a certain moment, but there’s always an expiration date for that moment’s work. Our work expires a bit faster than others maybe, but we don’t mind. We’ll be back the next game to make (the field) look great again.”