Alexis Thompson ‘17 would not quit. It was not even a consideration. Sure, her interview process was arduous — 11 interviews in all for Stryker Corporation, a leader in medical and surgical equipment and supplies — but she was used to hard work, to tenacity, to playing until the final whistle. Those were lessons, Thompson says, she learned well after four years earning her degree and playing a varsity sport at Hope College.

So for three months of interviews that ranged from the traditional sit-down question-and-answer sessions with potential bosses, to meetings in hospitals with potential clients, to taking a Gallup® StrengthsQuest test, to writing an essay about perseverance, to delivering a mock sales call, Thompson never gave up. And because she did, she is now a trauma sales associate for Stryker — named on Fortune magazine’s Top 100 Best Places to Work at #16 — and her sales territory is the east side of the state of Michigan.

Sports, it’s often been said, build character. But they do even more than that.

“Stryker is very adamant about maintaining a high-performing culture,” says Austin Brancheau ’12, also a Hope graduate and Thompson’s direct report. “I don’t think it’s a secret that our interview process is very selective and lengthy. It’s about finding the right people to fit in on the right team.

“That said, Alexis showed a lot of grit when she interviewed and grit is something that I think stems from her athletics experience playing volleyball at Hope. Whereas I think a lot of other people may have thrown in the towel after maybe the fifth step, Alexis went the extra mile to continue to pursue the next follow-up interview. She clearly demonstrated the tenacity to keep on pursuing this position with passion. And I think playing volleyball for Hope had a lot to do with that.” 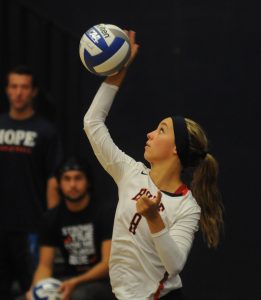 Sports, it’s often been said, build character. But they do even more than that. Playing a sport, especially at the college level, builds a strong and dogged work ethic for those who wish to pursue excellence. While Thompson may have come to Hope with some understanding of that work ethic, she believes it was clarified and embodied further in Hope volleyball.

“Playing on a nationally ranked volleyball team for all four years, I knew I was playing with the best of the best,” explains Thompson, who was the Flying Dutch’s libero. “With Coach (Becky) Schmidt, you never settle. It’s always go, go, go. I knew if I didn’t come in (to practice) early or stay late to get extra reps, I wasn’t going get any better. Quitting was never an option. Having that engraved in my head all four years in volleyball and in my classes, I think, transferred into my mindset for my career. So I study hard for my cases. I prepare hard for my sales calls. I know I can’t wing it and hope it goes well.”

As a trauma sales associate, Thompson not only makes sales calls to introduce surgeons and medical staff to the latest medical device innovations offered by Stryker to better treat patients, she also supports those medical personnel who use Stryker products when they are in the operating room. As surgeons repair broken bones or replace hips and knees, Thompson is with them in surgery to provide technical support. If there are any questions regarding Stryker instrumentation, she provides operating-room-ready solutions during surgeries that can be as short as 40 minutes or as long as six hours.

“I study hard for my cases. I prepare hard for my sales calls. I know I can’t wing it and hope it goes well.” 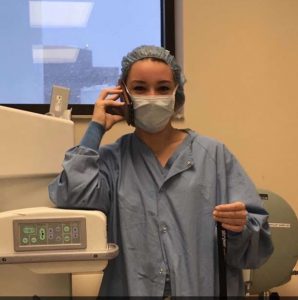 Though she first came to Hope to be a nursing major, Thompson changed her mind as a sophomore and majored in business instead. Her goal from then on was to work in a business in a health-related field. And that is why she persisted to become a Stryker employee. The former volleyball player felt it was the best place to use all of her Hope-taught talents and skills.

“The variety of classes I was able to take at Hope made me well-rounded for this job,” Thompson says. “I might not have had the anatomy knowledge but through business classes and communication classes, I was able to be a better communicator. Hope is a challenging place, both academically and athletically. I think when you’re surrounded by so many people who are succeeding and want to do well in life, that pushes you to be better, too. Being surrounded by that in my Hope classes, in Hope athletics definitely prepared me for this job at Stryker.”