The morning of November 1st was cold and brisk on Hope College’s campus; remnants of Halloween still hung about porches and windows while students bundled in winter jackets drifted down sidewalks. Inside the Kruizenga Art Museum, a small group of readers had gathered in a cozy conference room located immediately behind the front desk. They were there for a gallery talk by Charles Mason, the museum curator, and a book discussion led by Dr. Tatevik Gyulamiryan, a professor of Spanish literature at Hope College.

Mr. Mason began the gallery talk by pointing to the framed paintings which lined the perimeter of the conference room; they represented a variety of styles, movements, and artists, but all had one thing in common: they all prominently featured ruins. As he described the different pieces and the links between them, he talked of the catharsis that art offers; viewing it can allow us an opportunity to acknowledge or release emotions we may not have previously understood, while creating it allows us to rework those emotions and give them physical form. He pointed to some of the painters featured on the walls and detailed how they had turned to art as a means to make sense of their own emotions, to represent them physically and share them with others.

In the book discussion which immediately followed, Dr. Gyulamiryan brought up the role of art in the novel. She noted that Shakespeare features prominently, and is often held up as the pinnacle of art. Yet, she noted, the mantra often repeated throughout the novel, “survival is insufficient,” comes not from Shakespeare, but an episode of Star Trek. She posed the question, what are we, as readers, to make of this?

In the conversation that followed, the readers seemed to agree that the appreciation of art of all kinds was a central concern to the novel, and that Mandel uses art as a way to highlight the importance of human connection. To me, it seems that the treatment of art within Station Eleven is critical to the message of the novel and, even more, its selection as this year’s Big Read book.

Mandel lauds Shakespeare’s plays, but she also celebrates the value and power of Station Eleven, the fictional graphic novels created by Miranda. These graphic novels are cathartic for their author; just as Mr. Mason pointed out in the painters, Miranda finds reprieve in the act of creation, and the representation of her own experiences and sentiments is a way for her to come to terms with the past and become a more complete version of herself. Yet the particular power of art which the novel celebrates is not the power associated with its creation or consumption; it is the power of sharing art. The Traveling Symphony’s goal is not simply to read Shakespeare plays or perform them for one another; it is to share them with audiences who may not have heard of or seen them before. The power of the graphic novels does not come from the means or reason of their creation; it comes from the effect they have on the characters who possess them. While only two copies of the work exist, Kirsten has one of them. As she travels from town to town twenty years after the pandemic, she continually searches for others. The overriding feeling which the graphic novels inspire in her is a deep longing for another person with whom she can share them.

The novel suggests that the value we ascribe to works is arbitrary; in this world, the words of Shakespeare and Star Trek are given equal importance; two copies of a graphic novel created by a woman seeking to understand her own life prove central to the development of the story and its characters. Art, in all its forms, can wring emotion from us, offer hope for the future, and bring us into connection with others; art reaches its full potential to change and challenge us, move us and build us, when it brings us community. It is the sharing of art, then, the connection it can bring, that holds value, more so than the piece itself.

And here the novel answers for us a question which sometimes floats in the background of Big Read book discussions and events: what is the point? Why do we gather in conference rooms on cold mornings with people we do not know in order to discuss a novel we might not have read of our own accord? In short: because we need to.

We need stories, but more than that we need to share them. Dr. Gyulamiryan remarked during the discussion that what makes human beings distinct from other animals is the fact we pass information to one another through stories. Those tales become our connection. While the Big Read encourages individuals to read, and selects wonderful texts that are delightful to read independently, the value and meaning of the program is found in discussions such as this one. To actively share the experience of processing a story, to discuss our thoughts and our emotional responses, to relay personal experience and viewpoints, all of this works to fulfill that desire to find others who have been moved by the same work and can share it with us. “Survival is insufficient,” Mandel reminds us repeatedly, but perhaps it can also be said that when it comes to art, creation and consumption alone are insufficient. Art lives while it is shared. We live while we share it with one another. 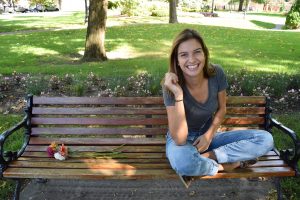 Annika is a senior at Hope College, studying English and Spanish, and this year’s NEA Big Read Lakeshore student intern. When not at the library or talking about Harry Potter, you can find her at a local coffee shop or the nearest Big Read event.