Hello to everyone participating in the 2017 Holland Area Big Read!

I hope everyone is enjoying When the Emperor was Divine and the events that are happening around Holland! 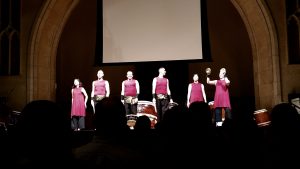 Last night’s Big Read event was the Raion Taiko Drumming Performance at Dimnent Chapel, and the six drummers did an outstanding job! I’d never heard of taiko drumming when I first went to the event, but I was excited to go, as was the large group of others there: old, young, and families alike. The Raion Taiko drummers didn’t disappoint, helping to kick off Big Read with a bang.

The drummers were very synchronized as they went through the pieces, playing with enthusiasm and extravagant movements to add to the experience. Thinking of how much time and dedication would go into memorizing the pieces and performing perfectly in sync with the other drummers amazes me. When the odaiko, their largest drum, was being played, I could feel the beat in my head and body because of the sheer volume of noise. 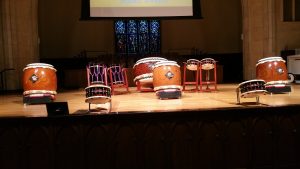 While the other five drummers moved the drums around in preparation for the next performance at about the midway point, one of the drummers, Brian Kaga, took the microphone. He first thanked us for coming, then proceeded to give us a tiny Japanese lesson. He taught us that tamago (tah-mah-go) is Japanese for egg, and the Japanese first started eating fish before adding egg to their diets. He tried to find an exact date for when they first began eating egg, but all he could tell us was that “it was a long tamago.” Cue the laughter. “I was told not to tell that joke, so—” More laughter.

All egg jokes aside, Brian told us a little about the history of taiko drumming and the drums the group used. Taiko music is based on weather and nature, like thunderstorms, rain, and earthquakes, and was originally used for ceremonies or practical reasons until after World War II, when it became a form of entertainment. Their biggest is called an odaiko and is 3.5 feet in diameter, weighing 220 pounds and carved from one solid piece of tree trunk. The Raion Taiko group had four different types of drums total (odaiko, okedo daiko, shime-daiko, and nagado taiko), and their smallest, called shime-daiko, had screws all around the circumference, which the audience was told is used to change the pitch and tune the drums. 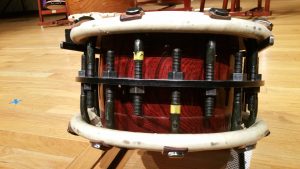 The performance wasn’t all drums, either—a shamisen (three stringed, banjo-like instrument from Japan) and a wooden flute also made appearances during the event, and occasionally, small hand cymbals and a gong were used for accents. 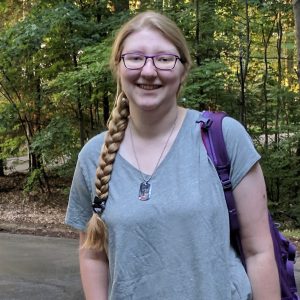 Contributed by Taylor Gort, a senior at Black River High School. She enjoys reading, writing while listening to music, and hanging out at the library.