The great specter of the modern age is shapeless, manifesting in a menagerie of forms: Fathers unable to keep a roof over the heads of their sons. Mothers having only empty pantries to offer their daughters. Neighbors squabbling over property that rises just above worthless.
Poverty is the English word for the ageless struggle that has left great minds troubled. Institutions such as Hope College have deployed organizations seeking to understand and explain the nature of it.

And on Feb. 4, Hope College student group Markets & Morality will be featuring a masterpiece film asking the question of how to eliminate poverty. The film is aptly titled “The Pursuit.” 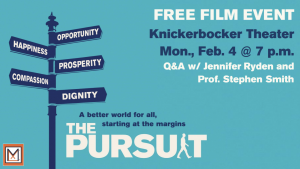 Arthur Brooks was once a professional man of music. He chose to chase after a question that societies so often answer incorrectly, as his film puts it: “How can we lift up the world, starting with those at the margins of society?” This set him on the path to joining the prestigious non-partisan think tank the American Enterprise Institute. Since 1943 the organization has solicited politicians and academics alike “dedicated to defending human dignity, expanding human potential, and building a freer and safer world.”

Brooks holds several degrees, including a Ph.D and a M. Phil. in policy analysis, which he received from the Pardee RAND Graduate school. His work as a professor, consultant, doctoral fellow, and New York Times opinion writer have all tied into his position as president at American Enterprise Institute, where he is set to be succeeded by Robert Doar in July.
“The Pursuit” follows Brooks as he travels the world, looking to examine and demonstrate just how those most in need of economic assistance can be helped. This takes him from Mumbai to Kentucky, from Barcelona to New York City, and even to a Himalayan Buddhist monastery.
“Markets & Morality as a whole has been working very hard to bring light to the issues of poverty around the world and how we as a society can effectively bring relief,” said Camryn Zeller, a sophomore member of the group.
“(Brook’s film) highlights this same goal and intention for the majority of poverty alleviation efforts, and (it) challenges his viewers and himself to find what actually works. He identifies poverty as more than a lack of material possessions, but the lack of opportunity to have and pursue dreams.”
The showing is set for Monday, Feb. 4 at 7 p.m., with free admission at the Knickerbocker Theatre.
Hope economics Professor Stephen Smith will give an introduction to the fil m, with a reflection at the end by Hope Chaplain of discipleship the Rev. Jennifer Ryden.

“The Pursuit” – a film and discussion about eliminating poverty
When: 7 p.m., Monday, Feb. 4
Where: The Knickerbocker Theater, 86 East 8th St., Holland,
Cost: Free

 Cameron Geddes is a Hope College sophomore majoring in economics and international studies as well as a second-year member of Markets & Morality and a staff writer for student-newspaper The Anchor.

This Week’s Sustainability Framework Theme
Community & Neighborhood: The places we live and the individuals we interact with support the development of our personalities and perspectives on life. Encouraging vital and effective communities is essential.